It is always a bad sign when crowds gather. On the morning of Wednesday March 21 in the year 1900, a crowd began to gather in Sydney. A thousand people had gathered outside the offices of the Board of Health in Macquarie Street. They had gathered because bubonic plague had broken out. People had already started to die from the Black Death. Panic was the only course of action.

The Government had stockpiled Haffkine’s serum (named after the Russian bacteriologist that developed it in a makeshift laboratory in a corridor of Grant Medical College) — a new plague vaccine, and had used it to inoculate front‐line health workers, new plague victims and anyone who might have come in contact with them. The panic was because the Sydney papers had been campaigning for a public vaccination program.

When the Board of Health finally opened its doors that morning, the crowd overran the place. In the melee property was damaged. Not much happened to inoculate people that day. In the end, the public inoculation campaign was abandoned. It would be another two decades before Australia was free from plague.

Australia has a long history of epidemic and pandemic encounters. Smallpox, polio, scarlet fever in 1830 that lasted for half a century, intermittent and regular bouts of influenza, and encephalitis lethargica.

Like it or not we are in the midst of a number of epidemics, not just in Australia. There are the fast moving ones that happen with many newspaper column inches like SARS and MERS — whipping up a frenzy of unpredictability. There are those that have become a part of the conversation like HIV/AIDS. And there are those that go under-reported like Dengue fever.

From November 2008 to May 2009 Cairns, Queensland was struck by an explosive epidemic of dengue virus (DENV-3). One that exceeded the capacity of the highly skilled dengue control teams to control it.

Australia is no stranger to outbreaks of this nature. A dengue outbreak had already occurred previously — in 1992. One of the consequences of that large multi-city outbreak was the development of the Dengue Fever Management Plan (DFMP) by Queensland Health in 1994.

Piecing together the fragments of an epidemic

The weather can predict disease, and create the perfect set of contitions for an epidemic to take hold. The climate in the months leading up to the outbreak of the epidemic was apt for the spread of the vector — the Aedes aegypti mosquito. The Cairns dry season, from May to November, customarily has low rainfall. In 2008, rainfall at the time was significantly more than usual, with heavy rains towards the tail end of September.

The heavier than usual rain was thought to have hatched mosquito eggs leading to the rapid escalation of mosquito numbers, serving as a primer for the outbreak that was yet to come.

For this epidemic to take hold and spread, it required a some-what perfect sequence of events. Unseasonably warm weather, with daily mean temperatures exceeding 30°C, occurred in late November and would have shortened the incubation period of the virus and enhanced transmission.

Researchers analysed case movements early in the outbreak and found that the total incubation period was as low as 9 days. They replicated and confirmed it in a lab setting and it took just 5 days.

27 days passed without the Queensland Health authority knowing about the outbreak. This allowed the virus to amplify and spread unchecked through its first month in Australia. Human-mediated dispersal were the words they used to describe it. The seasonal movement of people around that time most likely also enhanced the spread of the virus.

In all the virus had an unusually rapid transmission cycle that allowed it outpace control efforts. 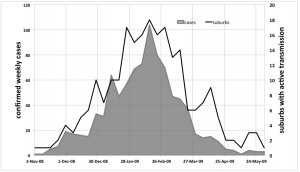 Sometime before the 3rd November 2008, a flight landed in Cairns. The flight brought back with it, among many other things, a passenger who had visited Kalimantan in Indonesia the previous month. Two days after the flight landed the passenger was to fall sick. It wasn’t yet clear it was dengue. Later it became clear that the passenger was the index case — importing the virus and initiating the outbreak. There had been no reported cases of DENV-3 in Cairns since an outbreak in 1998.

Researchers discovered that the first group of cases in the epidemic all came from within 200 metres of the index case. By day 17 of the outbreak there were already 6 local cases.

By the following spring, the rate of infection had dropped dramatically. Despite health services playing catch-up for most of the epidemic, ending the outbreak was a tour de force. The outbreak received widespread media attention — motivating a well-informed public to remove any water-holding containers that could act as a breeding ground for mosquitoes.

There was hardly any suburb in Cairns that had not reported cases of dengue, and had not been subject to vector control by April of the following year.

In the end, the outbreak caused 931 confirmed cases and one single death on 4 March 2009. And cost Queensland Health somewhere in the region of 3 million australian dollars.

What would eventually become evident was that even with what seemed like a highly professional contingency system in place to deal with an epidemic such as this — this time round, the disease got the better of them. This time round the epidemic was different. Different in the way it moved through the population.

“The apparent speed of transmission and its rapid geographic spread overwhelmed what had been a successful, organized first world dengue control program”

1 thought on “Life of an epidemic: Australian dengue”