A clinical study on kava, a Pacific plant, has found that it has properties which could be extremely useful in treating the symptoms of anxiety. The plant has been used recreationally in Pacific societies, in places like Polynesia and Hawaii, for a long time but this is apparently the first proper clinical study of the plant.

Now, I must admit, I’m writing this story because I have some anecdotal experience with kava (piper methysticum) myself. Simply, I’ve been an insomniac on and off for most of my adult life. It can be an inconvenience, but I mostly have it under control. Of course, I’ve tried numerous different things to ease the insomnia, with varying degrees of success – but kava was always one of the best. That is, before it became unavailable to buy here in the UK.

This latest study, led by researchers at the University of Melbourne certainly seems to support the plant’s apparent calming ability. It may prove to be very useful to the significant numbers of people, both in Australia and worldwide, who suffer from anxiety disorders.

Anxiety is a more common problem than many people may think. In particular, generalised anxiety disorder (GAD) is a blight to millions of people around the world; in Australia, 3% of people suffer from GAD, and the numbers are similar in North America and parts of Europe, with estimates in the UK being as high as one in 20. Over the past decade, I’ve known a huge number of people who suffer from anxiety, and unfortunately, treatments for this type of disorders are far from straightforward.

“Based on previous work we have recognised that plant based medicines may be a viable treatment for patients with chronic anxiety,” explained lead researcher Jerome Sarris at the University of Melbourne’s Department of Psychiatry, who believes that new an more effective options are needed for patients with anxiety, instead of the existing medications. Sarris stressed the complexity of GAD and the way it can significantly affect the daily lives of those who suffer from it, continuing to add that, “In this study we’ve been able to show that Kava offers a potential natural alternative for the treatment of chronic clinical anxiety. Unlike some other options it has less risk of dependency and less potential for side effects.”

However, less risk of dependency does not mean zero risk of dependency. I should also skeptically point out that, contrary to what many believe, “natural” does not necessarily imply better. However, a great many useful modern medicines and other chemical compounds are extracted and derived from plant-based origins.

The interesting thing about kava is that it’s traditionally used recreationally. Polynesian islanders use the roots of the plant to brew a sort of tea, which has anaesthetic and sedative properties. This tea is drunk to promote relaxation, not unlike the way alcohol is used in Western cultures. Unlike alcohol though, kava does not affect mental clarity. Some previous studies, albeit on smaller scales, have indeed suggested that kava is more effective than placebo at treating social anxiety.

Active components of kava roots are believed to be a group of chemicals known as kavalactones. Several Western companies have already developed methods to extract these compounds and they can be found for sale in various places. For instance, herbalists and health food suppliers may offer kava tinctures and tablets for sale. Other more adventurous entrepreneurs have added kavalactones to soft drinks such as kava cola – touted as an “anti-energy drink” and sold for its relaxing properties.

However, most recently some countries have stopped allowing sales of kava over health concerns, after some previous tests implied that it may have some effect on liver function. Countries including the UK, unfortunately for those of us who currently live here.

The study performed by Sarris and his colleagues lasted for 8 weeks in total, and involved 75 patients who had been diagnosed with GAD. Patients were given either kava or a placebo and were continually reassessed to determine their anxiety levels.

Interestingly, the study showed no significant impact on liver function due to kava. In fact, it was described as being “well tolerated” by the patients taking it. Neither particular adverse reactions nor withdrawl problems were noted either. This is good news for anxiety sufferers, as many mainstream medicines tend to have a plethora of possible adverse symptoms, and activity which some have described as “modest”.

The study also showed for the first time that certain genetic differences in individuals may affect their responsiveness to kava due to variations in their neurobiology. Sarris hopes this might  “pave the way for simple genetic tests to determine which people may be likely to have a beneficial anxiety-reducing effect from taking Kava.”

One final point which may be of interest to many people is the effect on the patients’ sex drives! In the female patients who took part in the study, sex drive was actually shown to increase – particularly interesting because many medications for anxiety and depression tend to have the opposite effect. This is, as I’m sure many people can appreciate, quite a concern for many people who may be required to take these medications. The reason? Well, obviously more studies are needed, but it’s thought to be not due to any aphrodisiac effect, but simply due to a reduction in anxiety. While no one’s said this explicitly anywhere, it seems that perhaps kava may be useful in treating any number of different forms of anxiety!

So where does this leave things? Well, more work is needed to get a better understanding of all of this, but it looks like good news for anxiety sufferers. Though it’s worth pointing out that this work was, in fact, funded by companies who make MediHerb and Thompson’s Kava products. Personally, I’d like to hear some confirmation of this study from an unbiased third party before taking it at face value.

Of course, kava products are actually freely available to buy, particularly over the internet. Though I must advise that anyone reading this to exercise caution before rushing out to buy some. If nothing else, make sure to read more about it first – there’s plenty of material available online.

However, if future studies manage to confirm Sarris’ work, then this could be very good news – both for anxiety sufferers and for certain South Pacific nations who rely on kava as a major export crop! 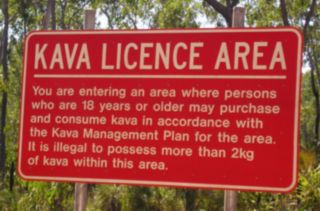