Let us introduce you a leading Australian quantum physicist and probably one of the most promising scientists in the world. His name is Andrea Morello. He is an electrical engineer and a quantum physicist. At the moment he is Associate Professor in Quantum Nanosystems at University of NSW and a Program Manager in the ARC Centre of Excellence for Quantum Computation and Communication Technology (CQC2T). His research is focused on building a quantum computer based on single spins in silicon. In addition to the research, Andrea is actively engaged in science outreach and education. So, let’s start with our talk. 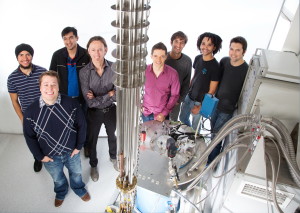 (1) Well, Andrea, we had a brief conversation before this interview and you introduced something about the projects you work on. Could you, please, take a closer look at what you do and explain to our audience what a quantum computing is and how quantum systems work?

A quantum computer is a machine that performs calculations, but stores and elaborates the information into “quantum-bits”. The difference between a quantum bit and a normal bit – like that found in a standard computer – is that the quantum bit can be “0” and “1” at the same time. Once you have many of such quantum bits all together, they can perform certain types of calculations using a much reduced number of steps, because they can handle some of the information all in one go.

(2) What is the focus of your research? Everyone can find out on the web that you and your team are developing the building blocks of a spin-based quantum computer. Could you, please, tell us what it is all about?

There are several different ways to build quantum bit. In other words, there are many ways to build the hardware of a quantum computer, and most of them involve the use of very unusual materials or physical systems. My colleagues and I have chosen a very special hardware: in fact, we have chosen to make quantum bits out of the same hardware that makes normal computers. We encode quantum information into the spin (that is, the magnetic orientation) of single impurity atoms, embedded within standard silicon electronic devices.

(3) I think it would be particularly interesting for our audience to say something about your background. You come from Italy. How was your life there? Did you always know you would become a scientist? I think many young people could use you as a good example of someone who does great things in his life. Could you, please, resolve that mystery and tell us how such a great mind works? Are you working hard or are you a very creative person? You told me at the initial conversation that the key of your success is a good focus. You said you should stay determined and concentrate only on one problem, rather than getting preoccupied with heaps of different ideas. Could you explain it better for our readership?

I grew up in a working-class environment, with not much room for big dreams. I studied in a technical high school, then I graduated in electrical engineering, and only after that I realized that there was a pathway to become a “pure scientist”. As for the focus, I think it’s important to take things from start to finish. I see a lot of people having great ideas and grand visions for a million different things, and then achieving nothing, because they don’t pursue it all the way, they get distracted by the “next big thing”. My humble beginnings have taught me to choose one thing and stick to it until you reap the fruits. Mind you, I have changed path many times in my life, but it was always a continuous line, one thing after the other.

(4) You gain an international recognition through publishing with the scientific journal Nature and collaborating with world-leading groups at Oxford University, Walter-Schottky Institute, Sandia National Laboratories, Purdue University and others. What are your experiences with all of these?

It’s part of the normal mode of operation for researchers who work and the leading-edge of things. You do good work, you publish it in important journals, and you get the chance to collaborate with other outstanding people. There’s nothing mysterious about it, it’s how science works. One interesting thing I found is that, the further you move to the top, the more you meet positive, interesting and engaging people. We are all in it to make a positive difference.

(5) Could you tell us a bit more what your current projects at UNSW would be? Are there any anecdotes regarding teaching, students or other colleagues? In other words, how it works contributing at an institution with such great experts? I think this could be especially interesting for our readership.

I am working on scaling up the spin-based quantum computer in silicon. My team has developed – and patented – some new ideas for how to make quantum logic operations using a multitude of impurity atoms, and make the operation very robust. We are also working on coupling single spins to single quanta of electromagnetic fields. Working in a world-class institution means you have good resources, and you are able to attract the best people. It’s the quality of the people in the team that makes the difference.

(6) For your achievements, you were awarded the 2011 Eureka Prize for Scientific Research, the 2013 Malcolm McIntosh Prize for Physical Scientist of the Year, and the 2013 David Syme Research Prize. Could you explain us closer what all is needed to achieve all those?

There is no simple recipe for it. These Prizes were the recognition for the ground-breaking work my team has done on processing quantum information in silicon. To obtain this type of scientific breakthrough you need to choose an important, challenging research goal, and then… be successful at it! But there is a lot of risk and a lot of uncertainty involved in doing research at this level.

(7) There are a lot of speculations in public that mind and conscientiousness phenomena could be explained using quantum mechanics. What is your opinion about that? Is that possible?

Quantum mechanics is everywhere. At some microscopic level, everything is quantum, one way or another. But what people speculate about is non-trivial quantum phenomena, of the kind that normally happen only for very small object in a very isolated environment. It will be difficult to verify whether such phenomena take place in the human brain. Honestly, most of the talk about quantum mechanics and consciousness seems to be about semantics, using the vocabulary of quantum mechanics in a metaphorical way. Most of those speculations should not be taken too literally. They are more like poetry than science.

I would be very curious to see how big we can make a physical system while still behaving quantum mechanically. Building a quantum computer is good in that sense: it’s a modular device, which can be built up from simple elements. I would like to see if there is some fundamental size or computing power above which it stops working, and if so, discover why.

1 thought on “A Brief Talk with Andrea Morello, a Leading Australian Quantum Physicist”