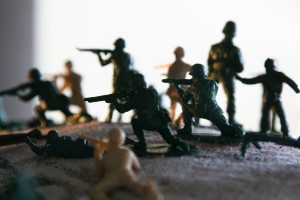 Imagine the scene — from the mouth and nose, through the pharynx into the trachea, separating into the left and right main bronchi at the larynx. This is the start of your airway. This is to be the site of inflammation, or rather, the site of battle. Across the landscape that is the airways, two sides are about to go to war. Invading pathogens versus human inflammatory cells. This war will eventually lead to pneumonia.

To treat pneumonia we need to pin down the exact invading pathogen and treat accordingly. The most common types of infectious agents are viruses and bacteria. But of all the microorganisms that can cause pneumonia, most cases are down to only about two dozen species. Identifying the infecting agent, the actual cause of pneumonia, relies on a lengthy process; from a full patient history and examination, to imaging studies and epidemiological information, together with bacteriological tests.

Despite all of this, in up to 50% cases of pneumonia, the causative pathogen remain unidentified.

In and amongst the invading pathogens are other organisms that are just bystanders — colonizing the airway. Other commensal organisms in and amongst our instigators of war. In diagnosing pneumonia many are implicated and detecting these organisms in the airway does not necessarily mean they are the cause of infection. As such, any commensal organism that falls within a certain spread of criteria is thought to be the causative agent.

The key to all of this is the difference between colonization and infection.

To discriminate between the two types of organisms in a pneumonia infection — infectious and colonizing —  researchers from Japan came up with the “pneumonia battlefield“. The titled “Battlefield Hypothesis” allows them to be able to predict pneumonia causing pathogens.

When two sides go to war, the numbers of “combatants” on each side adequately reflects the current state of the war. The hypothesis reflects this principle. Within that scene along your airway and into the lungs, your body has amassed its troops to combat the invading pathogens. The ratio of pathogen cells to human inflammatory cells in the sputum is an index for the dominance of the pathogen along the pneumonia ‘‘battlefield.’’

It seems a simple tally of the numbers on each side can best identify the cause of pneumonia. And the best way to count up numbers on each side is by PCR. The polymerase chain reaction (PCR)-based test is routinely used as a complementary test in diagnosing pneumonia. Apart from its rapid nature and its sensitivity (being able to detect even a small number of pathogen cells), PCR can detect the non-colonizing, non-commensal organisms that are most likely to be the causative pathogen.

The problem lies in the fact that the test is unable to discriminate and distinguish a commensal organism that causes pneumonia and one that that is simply a bystander. In essence, the test is unable to tell infection from colonization. That is, until you apply the “battlefield hypothesis”.

When pneumonia occurs, the numbers of both the causative pathogen and human inflammatory cells increase at the inflammation site. The colonizing pathogen lags behind, making up a small proportion of the total combatants. In an infection, pathogen cells predominate the ladscape. And it’s this overwhelming ration that proves to be an indicating factor of the causative agent.

It seems, like in all great wars, it’s the numbers that count.