Puppy love – same as baby love? Yes, it seems so:

“My dog talks to me with his/her eyes”- every dog owner on the planet says this. Now, for the first time, it seems that this well-known truth has a scientific basis. A group of Japanese researchers found that dogs indeed talk to us, in a manner of speaking – when they gaze at us we release the hormone oxytocin, the same substance responsible for mother – baby bonding.

It is well known that oxytocin, which is sometimes called “the love hormone”, is very important in promoting the bonding of a mother with her baby. There are well-known and described loops of oxytocin, whereby one action on one side (eg, the baby gazing in his/her mother’s eyes) promotes oxytocin secretion in the mother, resulting in increased care and attention to the baby – which results in further gazing and so on. However, these loops have been described only in humans; it was thought that such mechanisms rely on social/cultural mechanisms that were specific to one species, eg to us. Researchers from three Japanese universities found out that this is not the case and describe what is thought to be the first oxytocin loop between different species – in this case, humans and dogs.

Dogs share with us humans some characteristics, such as intense social interactions with their peers and reduced aggressiveness, if compared to their closest relatives – wolves. They retain some baby-like traits even in adulthood, which may make things easier when it comes to interacting with other individuals. Finally, they also gaze-both for understanding the intentions of other dogs and for better bonding. 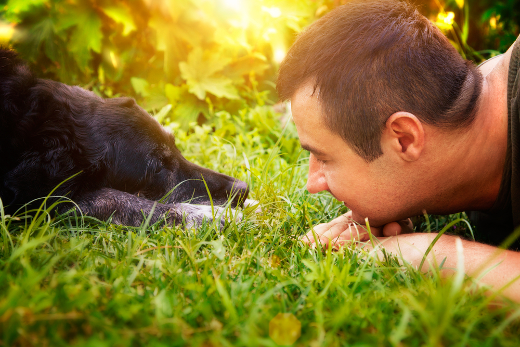 The researchers set up an experiment to measure oxytocin before and after a dog-owner interaction, with a special attention on gazing (dog-to-owner). Among all the possible dog-owner interactions – talking, touching, and gazing – the latter was the only one that correlated strongly with oxytocin secretion in the owner. Oxytocin secretion in dogs after the gazing interaction went up as well: this was the only case where there was “hormone correlation” between man and dog.

The researchers also tested whether giving oxytocin to the dogs via nasal administration led to changes in behaviour. They found that in female, but not male, dogs the administration of oxytocin resulted in prolonged gazing time. The scientists remarked that human females as well are more sensitive to the effect of oxytocin than males, so this needs not be a surprising finding. However, the fact that oxytocin went up also in the owners of the female dog, as reported in the study, is indeed striking, as it strongly suggest there is an oxytocin loop at work.
We asked the researchers whether they can foresee oxytocin loops also between humans and other animals and Takefumi Kikusui, the corresponding author on the paper, replied as follows: “We do not have any other data on this. Yes, there are other species that can also stimulate oxytocin release in humans. One thing that we noticed is that wolves that have a very tight connection with the owners could not stimulate oxytocin in the owners, probably because of the lack of gazing. However, if cats gaze to the owner, it is possible”. 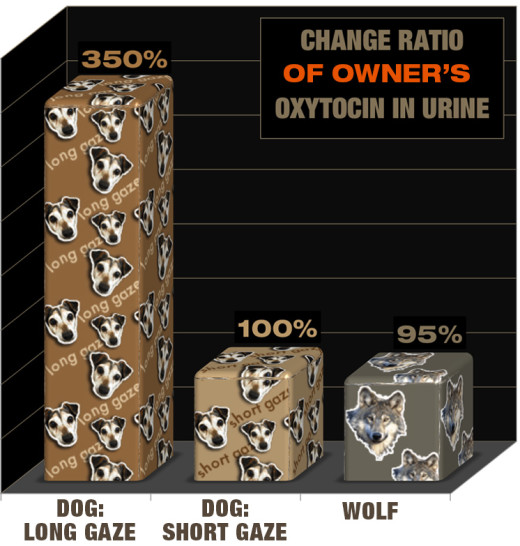 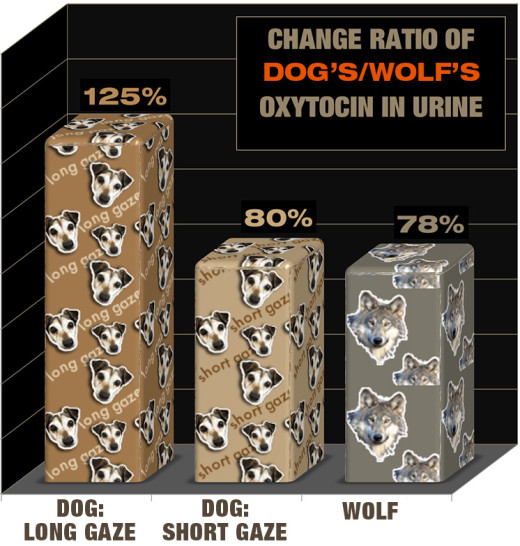 The researchers speculate that dog owners feel for their dogs the same kind of affection they have for their family members – and operating with the same biological mechanisms too. We asked the researchers a comment on their findings and Dr Kikusui replied that there is more work to do: “Now that we can see that the bonding systems between human and dogs is similar to the one between human caregiver and infants, the next question is to see what kind of genes are involved in this co-evolution in dogs”.