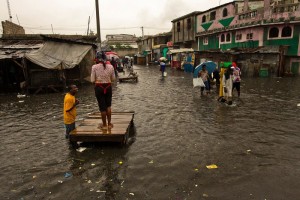 Before hurricane Sandy touched down on the east coast of America, it passed through the Caribbean, causing around 80 fatalities — 60 of them occurred in Haiti, 11 in Cuba, two in the Bahamas, two in the Dominican Republic and one in Jamaica.

Hurricane Sandy started life out over central America, nonchalantly, as a collection of winds that would eventually gather momentum, speed and energy. It began its non-discriminating path through the Caribbean, eventually to hit Puerto Rico and the Dominican Republic as well. As it hit Jamaica it was a category 1, destroying around 1500 hectares of farmland. In Cuba the next day it was a category 2, destroying banana, coffee, bean and sugar crops. Sandy destroyed roughly 30% of the nation’s coffee farms. Add to that the 200,000 damaged homes. The Bahamas archipelago was next, before it would set it sights on America’s eastern seaboard.

With everyone concerned with the numbers, damage, and brute destruction, there is the underlying problem that any disaster hit area has to deal with. Namely, the aftermath. It is the aftermath of the Caribbean region we must now think about. There will be the inevitable worry about food prices from this point on. Huge crop losses in southern Haiti raise famine worries.

Prime Minister Laurent Lamothe, after assessing the damage, said “Most of the agricultural crops that were left from Hurricane Isaac were destroyed during Sandy, so food security will be an issue.”

Three days of constant rain caused rivers to overflow and the floodwaters to rise. Most of southern Haiti is underwater. In the whole Caribbean region rainfall amounts as high as 250 millimeters were measured over eastern Cuba and some extreme southern areas of Hispaniola. Haiti experienced 20 inches. Port-au-Prince receives an average annual rainfall of 54 inches.

As the rains stopped the damage is only made worse to the tune of infectious diseases such as cholera. Haiti has been fighting a cholera epidemic since 2010. A cholera outbreak that has killed over 7400 people and left up to 600 000 sick across the country.

According to the Pan American Health Organization (PAHO) and the WHO, there is an increase in cholera cases in the south and south-east, where 49 cases and 9 deaths have been recorded.

The list of infectious disease outbreaks following natural disasters is long. Although, usually there are some that are more common than others. Diarrheal diseases, acute respiratory infections, malaria, leptospirosis, measles, dengue fever, viral hepatitis, typhoid fever, meningitis, as well as tetanus and cutaneous mucormycosis have all been documented as the incidence and magnitude of natural disasters increase.

Natural disasters and infectious diseases outbreaks represent a significant challenge. But they do not necessarily go hand in hand. Disasters do not transmit infectious diseases. But the risk of infectious disease is multiplied by the change in situation — populations displaced, overcrowding, limited access to food and water, and public health breakdown.

Haiti’s Prime Minister, Laurent Lamothe said “I am launching an appeal to international solidarity to come and help the population, to help support the completion of our efforts towards saving lives and property,”

Flood disasters are the most common natural disasters throughout the world, and diarrheal diseases are the leading cause of death from displaced populations living in camps. France has promised to rebuild seven destroyed bridges and Mexico has offered food. How Haiti deals with the aftermath of Sandy will be one to follow closely.