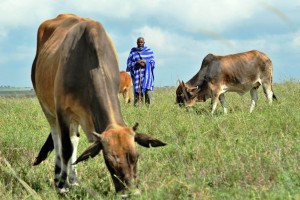 Karamoja region in northern Uganda is one of pastoral communities and closely dispersed ethnic groups that rely on livestock for their livelihood. It is within a semi-arid place like this that economies based on meat, milk, and blood from cattle thrive. In communities such as this one, cattle plague will always be the number one fear.

The morbillivirus rinderpest goes by many names — cattle plague in the old english or “loleoo” as the Karamojong say. Across the globe, thanks to a concerted effort of large international organizations, rinderpest has been eradicated. The disease was detected and confirmed for the last time in Kenya in 2001 — an eradication more than 70 years in the making. And when it got down to the final stages it was the local herders in those hard to reach areas that made the decisive difference.

Africa had always lagged behind the global eradication effort, due — in part — to small reservoirs of infection that persisted in the remote and marginalized herds of the agro-pastoralists. It was becoming evident that if rinderpest was to be eradicated a more nuanced approach would be needed. In a paper published today in Science, authors analyse the essential role of Africa’s nomadic herders in ridding the world of rinderpest and hope the lessons learned will translate to other livestock diseases across the developing world.

“the most dreaded bovine plague known, belonging to a select group of notorious infectious diseases that have changed the course of history.”

Rinderpest — a relative of the human measles virus of which it was most likely the precursor  — is a disease unlike most others. No one disease can claim to be at the root of the founding of the entire veterinary profession. It is a disease that can be linked to the landmarks of history — the fall of the Roman Empire, the conquest of Christian Europe by Charlemagne, the colonization of Africa, and even the French Revolution (although it shares that fame with an Icelandic volcano).

Rinderpest arrived in Africa in the late 19th century, setting off the first great African pandemic. It spread from the Indian to the Atlantic Ocean, quickly and in both domestic and wild animals, reaching southern Africa just as the Anglo-Boer War was about to ignite in 1896.

The pandemics of Africa have been one of a mosaic of flaring epidemics, infecting an reinfecting like school children on the playground. As pandemics died down, Africa was left with scars in the form of pockets of infection from which arose further periodic epidemics. By 1918 cattle plague grew like untendered weeds across and throughout all the colonies of West Africa. It’s surge continued unabated, southward, towards the country now known as Zambia. The promise of another pandemic in southern Africa was evident. At the turn of the 20th century, Abyssinia threatened neighbours like Sudan by harbouring the disease. Kenya, Ethiopia, Eritrea, and Sudan were continuously in harms way and continually and periodically infecting Uganda, Tanzania, Rwanda and Burundi like contagious school children.

Uganda’s encounter with rinderpest has lasted ever since then, and it’s last persisting rinderpest reservoir in the cattle of the Karamajong people ended in 1994.

“within the power of man to eradicate infection from the earth”

Rinderpest is only the second infectious disease to have been globally eradicated (and the first livestock disease). It was Louis Pasteur’s claim that it was “within the power of man to eradicate infection from the earth”. Indeed, after smallpox this seemed possible. Perhaps today it is a different story. The resolution that declared the end of smallpox came at the 33rd World Health Assembly in Geneva on May 8th, 1980. It declared the end to mankind’s suffering from a disease that was feared more than any of the other great pestilences — a disease, during the cold war, the Russians feared more than an American invasion. The last case of smallpox was registered only 3 years and 5 months after the world decided to go after it — a dramatic demonstration in achievement. Back then, the question of if mankind should bring about the death of a disease (another species) was as much a philosophical debate as a scientific one. Could mankind do it? Should we do it? An ethical debate that doesn’t seem to exist anymore.

However, as is always the case, the reality of the situation proved much more complicated. With smallpox, no one was left behind. The final arduous distance of rinderpest eradication was a measure of determination more than anything else. One that saw the virus entrenched in those remote parts of Africa, just like it had done before during colonial times. Regions with weak governance, poor security, and little infrastructure presented shelter for the disease.

The problem had always been that eradication attempts would fail, time and time again. Failing less through technical incompetence but more as a result of waning enthusiasm and bureaucratic stagnancy. In the 1970s, with rinderpest again reduced to small pockets of infection, the completion of eradication was left to national governments to handle individually through annual vaccination of calves. With the lost sense of urgency rinderpest resurged.

The key to success this time round had a basis in a social change much more than in any technological magic bullet. Although, it is through the magic bullet that the doors to social change were opened. It was the development of a thermostable vaccine — a rarity among diseases of the developing world. Usually, vaccines require a temperature controlled supply chain in order to get it from where it is produced to where it is needed. This cold chain can often be a logistical nightmare.

In 1981, the development of a thermostable rinderpest vaccine was identified as a research priority. The result, after just 4 short years, was a vaccine that you can store at 37°C for more than 8 months — Thermovax.

Suffice it to say, the thermostable vaccine threw out the rulebook and tore apart the existing dynamic. Suddenly, what was once a top-down bureaucratic-like dictation became a more flexible interchange between those on the ground and experts. The mode of service delivery was changed for the better. And in a stroke, the most remote of areas were now up for grabs.

But that was only half the revolution. 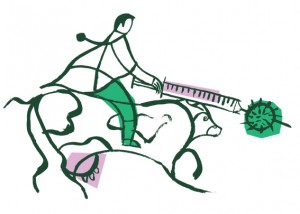 Tom Olaka, a community animal health worker in Karamajong, was part of a vaccination campaign in remote areas that led to the virus’ final curtain. A different kind of vaccine allowed more and more health workers like Tom to venture into remote areas by foot, animal transport, or by bicycle. Not only that, it allowed local herders to be brought into the mix (the other half of the revolution). There was a realisation that existing veterinary knowledge — hidden in plain sight with the local herdsmen whose cattle is their livelihood — could be leveraged to finally eradicate the disease.

A realisation that seems obvious if you think about it, and if you know where to look for the clues. The vocabulary of livestock dependent communities usually includes terms to cover clinical syndromes as well as specific signs and symptoms of disease. The Nuer of South Sudan have 39 separate terms to describe the colour of a cow.

And so, it was in synergy with the local herdsmen that allowed veterinary personnel to interact at a grassroots level to more effectively target control measures. Everything from the sizes of cattle herds, their location, seasonal movements, and the optimum time for vaccination became essential in these remote areas. Researchers state that community-based vaccination programs such as these helped achieve herd immunity levels greater than 80% and were at least as effective as the best public veterinary service programs in Africa conducted in more accessible areas.

This is the relatively unknown field of participatory epidemiology, that has helped find and target disease in areas where other conventional methods have failed. It is now being applied to other diseases such as Rift Valley fever, highly pathogenic avian influenza, and foot-and-mouth disease in countries such as Pakistan, Tajikistan, Uzbekistan, Indonesia and Afghanistan.

In May of 2011 loleeo was declared eradicated by the World Organization for Animal Health (OIE), thanks in no small part to the local tribes and herdsmen.