Keri Bean is a meteorologist specialising in the atmospherics of other planets. She is on the team operating the Curiosity Rover for NASA’s Mars Science Laboratory mission. Prior to MSL, Keri has had roles in the missions for other Mars rovers Spirit and Opportunity, a prototype Moon rover, the Phoenix Mars Lander, and the Hubble Space telescope. And she’s just 25 years old! That’s a pretty incredible CV to rack up already.

In this interview, Keri talks with me about her work on MSL and the other missions, plus how and why she got into space science. It all started when a tornado hit her pre-school. 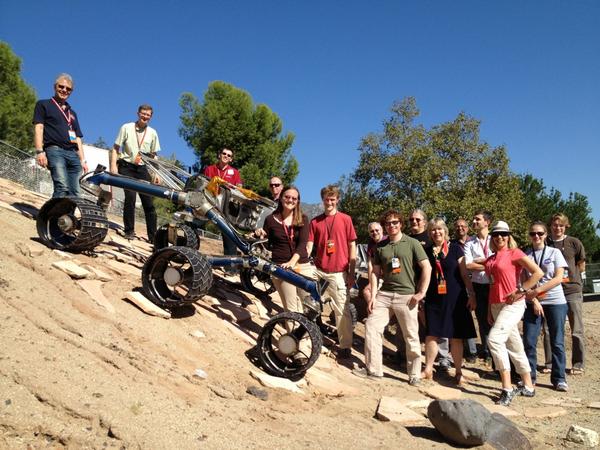 Keri (centre) with many of the MSL team and ‘Scarecrow’, the other Curiosity test rover (Scarecrow is lighter than Curiosity so that it mirrors the lower Mars gravity).

A GIF of the partial solar eclipse by Mars moon Phobos, as captured by the Curiosity rover—an image capture task coordinated by Keri.

A photo of Phobos (highly zoomed it, and hence quite grainy) taken by Curiosity just after dusk on 21 September using one of its Mastcams, showing its ‘potato’ shape.

The ‘Chariot’ Lunar rover prototype for which Keri worked on camera design (and which James May managed to have a minor accident with when filming an episode of Top Gear!).