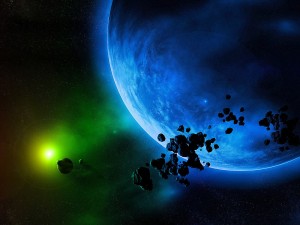 We begin with a confession. There comes a time in every boy’s life that they realise, or rather they make peace with the fact, that they’ll never play professional sports. Basketball, rugby, football, hockey… the sport of choice changes, but the realisation stays the same.

I mention this only as an analogy. A segue into the real realisation that matters. I have come to the realisation that I will never go into space. A realisation not fueled from a fear of flying or vertigo or any other physical barrier to space flight (apparently almost half of all the medication used by astronauts are sea-sickness tablets. Sea-sickness in space is such a problem they even have a scale for it. The Garn scale. Did not know that). This realisation, not based on anything tangible and not based on any kind of pragmatism.

Allow me to explain. As a child of that generation lost between science and science fiction. Born and living through a time when space exploration was not only real — as told through NASA space shuttle launches, Hubble, Discovery, Lunar landers and the rarely mentioned, unsuccessful Beagle II — but also when space exploration was hyper-real. As told through popular culture. A love affair with space, cultivated from TV shows, movies and science fiction.

After all of this, how could a Space that has been romanticised by popular culture be frightening? How could infinite possibilities, far off worlds and the chance to understand things we haven’t even come into contact yet with… how could all of that be scary?

The answer: I am a parasitologist. What that means is that for years I have tried to understand the inner-workings of life… in one way or another, through detailed biochemistry, biology at the molecular level, stripping life down to its basic parts and trying to build it back up again. From a basic grounding in biological chemistry I have sought to apply what I had learned to things more relevant and with a more clear goal. I chose disease. Not just any disease… diseases of a tropical and infectious nature. Parasites! Diseases that not only use you, but need you to survive. Diseases that prey on our vulnerabilities as well as our strengths. Diseases that use our patterns of everyday living against us to get what they need. Diseases that go out of their way to change us to help them procreate and survive.

Apply this to space and you begin to see my problem. Still, hidden within this is a fascination… a fascination predicated on the simple question “what happens when we do encounter alien parasites?”

Alas, with a planet that seemingly has no where left to explore the only destination is to look towards the stars. With the planet’s impending doom (an exaggeration just for effect), and with the ultimate survival of humanity dependent upon colonization of other planetary bodies there are those who have taken it upon themselves to get us there. There are a myriad of different steps along the way. One of which is lies in tiny worms that have become the ultimate model organism — Caenorhabditis elegans. C. elegans shot to fame when it was discovered that these worms survived the Challenger disaster.

C. elegans have been used as model systems to compare muscle protein synthesis in astronauts and as the canary in the coal mine to detect in-flight radiation exposure. And when researchers wanted to see if RNA interference could be used to block muscle protein degradation — they shot the worm into space.

All these were, however, short-term experiments. So the ideal experimental condition would be long-term. Space is vast, so any exploration to another planet is going to take a while. We would need to know the long-duration, long-term effects of space travel. Long-duration space flight poses any number of problems, and a key question is how to study them in a way that’s applicable, and most of all cheap.

Changes in physiology from long-duration space flight lack appropriate biological models that can be sustained for long periods of time in space. Researchers have recently been able to develop a remote automated culture system to successfully grow multiple generations of the worms in low Earth orbit for six months.

For over 12 generations, the worms were grown and their development observed — particularly when fed and re-fed. They found that the multi-cellular soil worm develops from egg to adulthood and produces progeny with identical timings as on the Earth.

C. elegans has been the model organism of choice for many experiments and investigations right here on terra firma and that trend, thanks to this unique culture system, will continue into low Earth orbit, and hopefully beyond.