We continue with the series of articles about cryptography. More precisely, this one can be defined as a brief review of its history and the most significant ciphering device of ancient world. The initial post about this topic can be found here.

Going back through time, the Mankind always had the need to transform the message and to keep the information hidden. One of the oldest cryptography tools was a Spartan scytale. It is a tool used to perform a transposition cipher, consisting of a cylinder with a strip of parchment wound around it on which is written a message. The ancient Spartans and Greeks, in general, are told to have used this cipher to communicate during military campaigns. 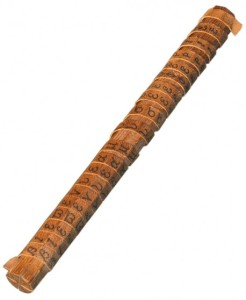 The idea of the scytale ciphering is as follows. The recipient uses a rod of the same diameter on which he wraps the parchment to read the message. It has the advantage of being fast and not prone to mistakes which is a necessary characteristic when on the battlefield. If not, it can be easily broken. Since the strip of parchment hints strongly at the method, the ciphertext would have to be transferred to something less suggestive.

From indirect evidence, the scytale was first mentioned by the Greek poet Archilochus who lived in the 7th century B.C. The ancient Greeks used this cipher to communicate during military campaigns. Sender and recipient each had a cylinder of exactly the same radius. The sender wound a narrow ribbon of parchment around his cylinder. Then he wrote on it lengthwise. After the ribbon is unwound, the writing could be read only by a person who had a cylinder of exactly the same circumference.

Imagine that each column wraps around the dowel one time that is the bottom of one column is followed by the top of the next column.

For instance, the original message can be: kill king tomorrow midnight

The key parameter in the scytale encryption is the number of letters that can be recorded on one wrap ribbon around the dowel. In the example, the maximum is 3, since there are 3 rows in the wrapped message. The last row was covered with blank spaces before the message was encoded. It is called the wrap parameter. If you don’t know the wrap parameter you cannot decode a message.

In conclusion, the Spartan scytale is one of the earliest encryption devices in the history. It was used by the Spartan Military for encoding message sent between commanders. In modern cryptography techniques, the scytale can be replaced with appropriate matrix system. Using the similar approach, the message can be ciphered using that method.

1 thought on “A Scytale – Cryptography of the Ancient Sparta”