Christmas is here – that wonderful time of year reserved for family gatherings, delicious meals and being lazy in front of the telly. Not surprisingly, most people experience dozing off while watching their favorite Christmas show due to all those sweets and warm blankets. However, there is a solution for all the TV addicts that don’t want to give up on their sweet naps but still want to know what happened on their show without waiting for a rerun. It’s a brand new gadget named KipstR – a wristband that “notices” when you fall asleep and automatically sets a TiVo box to record the programme that was on. 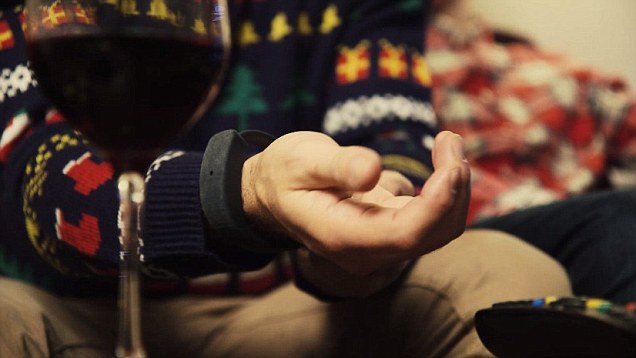 The clever wristband was created by two teenagers – Ryan Oliver (15) and Jonathan Kingsley (14), students at Manchester Creative Studio.They designed it in partnership with Virgin Media, under their “Switched on Future” initiative. According to Virgin Media survey , 18 percent of viewers will fall asleep on Christmas Day while watching TV. With the help of this incredible gadget, the rest of their families will be able to switch to another channel while the previous show is being recorded – without worries that the recording will be lost.

How does the wristband work and what is it made of?

The bracelet uses pulse-oximetry technology that measures oxygen levels (its saturation in the blood) in a non-invasive way. The oximeter is a kind of a sensor that detects subtle changes in the blood flow which indicate that the user is asleep. As we take oxygen into our lungs, it attaches itself to haemoglobin in the red blood cells, and circulation changes when we fall asleep.

Apart from a pulse-oximeter, the prototype of the wristband consists of a spark core chip, LiPo battery, push button and sleep mode indicator. The chip is the motherboard of the device which processes all the data gathered by sensors. The wristband is printed on an Objet Connex 3D printer and its housing is made from Polyjet resin. This should increase the durability of the KipstR compared to ABS and PLA bands.

KipstR “determines” whether the user is asleep or not by measuring the heart rate. Then, it communicates with the TiVo box and “tells” it to pause and record the programme that was currently being watched. When the user wakes up, the heart rate rises, and KipstR sends new data to the Virgin Media TiVo box and it resumes the programme. While the programme is being recorded, TV channels can be changed without fear that the recording will be lost.

In an interview with Daily Mail, one of the inventors, Ryan Oliver, said: “We jumped at the chance to work with the Virgin Media team on this project, it was a brilliant challenge for us but we’ve learnt so much and are really pleased with the end result.” [1] Jonathan Kingsley added: “It’s given us a taster for what we would like to do when we leave school. We’re excited to see what the next project will bring.”

Neil Illingworth, the head of advanced technology and innovation at Virgin Media commented on the new invention: “We have been exploring the possibilities of connected entertainment for some time and are very excited to unveil KipstR. With emerging new technologies, it is possible to create almost anything, including emotionally entertainment systems that can suggest shows based on your moods, or even harnessing brainwaves to control your television.”

This means that in the not-so-distant future, KipstR could be designed to recognize users’ emotional reactions to the show they are watching, adjusting the programmes to the users’ taste. Thanks to the wristband, TiVo might be able to learn what programmes users love to watch the most and tag them. This technology won’t be limited to watching TV only. KipstR could have a more significant role and control other devices as well, powering them up and down and saving a significant amount of money and energy.

According to surveys, fathers are those who will most likely benefit from KipstR. They are the ones who are usually in charge of the remote control on Christmas and the ones who will most likely fall asleep in their sofa. Therefore, this smart wristband could be a perfect present for them. However, KipstR is still on trial this Christmas and is not available on the market yet.If you’re a Virgin Media TiVo customer, you can register for a trial here.