For the first time ever in the entire world, a team of neuroscience research specialists have been able to successfully establish brain to brain communication between human beings over a long physical distance. Composed of four research experts between the age of 28 and 50 years old from the Harvard University’s medical school, Axilum Robotics in France and the Starlab Barcelona in Spain, the team was able to transmit simple messages over a 5000 mile distance, from one person located in India to three people in France. This was carried out without having to perform any form of surgery on the participants. 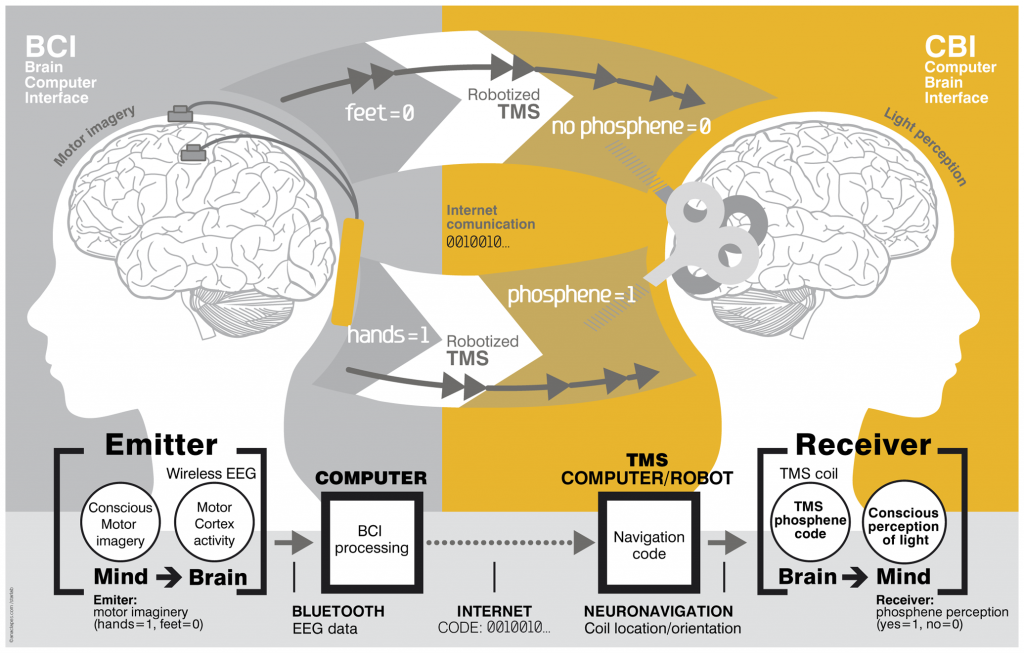 The procedure was carried out through a scientific technique referred to as electroencephalogry, which facilitates monitoring of signals sent by the brain, from outside the body, then records these signals in a form that the computer can be able to process and sends them over the internet. Once the signal reaches the receiver’s end, electromagnetic induction is used to trigger action in the visual cortex of the receiver, again from the outside the body, thus successfully passing the signal to the receiver’s brain for interpretation and action.

During the research, the person who was in India was treated as the emitter of the signal, while those in France were meant to receive and interpret the same signal. The emitter’s head was fitted with a special gadget; an electrode based brain computer interface (BCI) which was used to transmit a recorded thought to the recipients. Once fitted on the emitter, the BCI worked through interpreting electrical currents from his brain and then converted them into binary code that is similar to what most computers use to process data. The person was first shown how the words are converted to binary code then allowed to use these words to envision certain actions such as moving a hand or leg. The code was then entered into the laptop in form of 1’s and 0’s using the emitter’s thoughts, and transferred to the receivers, who were fitted with a computer brain interface (CBI). The purpose of the CBI was to emit electrical pulses through the receiver’s head, which was then translated into thoughts and actions.

The report’s co-author Alvaro Pascual Leone said the main intention of the research was establish if there was a possibility to create communication between two individuals through reading activities of the brain of one participant, then transfer the same to the brain of a different person. The research was carried out across a great physical distance by use of the latest existing communication pathways such as the internet and other scientific devices. However, plans are already underway to establish direct communication between brains of human beings without using any third party communication devices such as the internet.

The process is still in its initial stages as it only involved communication of simple messages to accomplish very simple tasks such as movement of the hand or leg, however this is still a great step that has been made, and may form the basis of several great advancements in the field of neuroscience, in future.