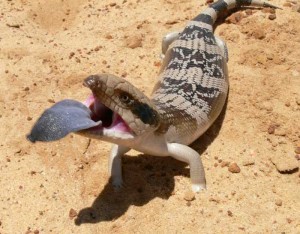 Burra, South Australia. Dirt roads link sparsely populated towns and communities once home to copper miners that lived in tiny dugouts along the banks of the creek. Burra is a place capsulated by hot, dry summers and cool moist winters. Across the arid place a grey-brown reptile with short limbs and a large cumbersome head shuffles along the dirt in search of the place it calls home. No other living thing is in sight. For all intents and purposes, this lizard is the last being in existence.

The Pygmy Bluetongue Lizard is the smallest of the genus Tiliqua and, unlike the other members of the genus, it has a pink tongue. Its home is a vertical burrow constructed by spiders. The bluetongue lizard is generally territorial and lives a  life of solitude. The solitary lizards rarely leave home, and when they do rarely for any great amount of time, taking solace within their holes for many months at a time and rarely encountering a neighbour outside of mating season.

The lizard’s use of wolf and trapdoor spider holes as a home is only a recent discovery. It really makes no modifications to its lodging, using it for day time shelter, retreat sites for hiding, ambush sites for hunting passing prey, basking sites for thermoregulation, and birthing sites. Really from cradle to the grave.

At the height of the mining boom, the population of miners living in the Burra region was in the area of 5000, approximately the number of lizards that currently roam the grasslands near Burra today. Bluetongue lizards are now endangered and under threat from climate change, the changing of the natural soil under its feet due to ploughing of native grassy understorey, and — most importantly — from parasites.

The lizards are host to an ixodid tick, Bothriocroton hydrosauri, and an oxyurid nematode, Pharyngodon wandillahensis. Two parasites that don’t really go out of their way to be parasitic.

How a host acts can be very beneficial for a parasite or pathogen. Parasites evolve to get the most out of their host… by hook or by crook. Some parasites go to great lengths to change the behaviour of their hosts. The Tom & Jerry dynamic witnessed in Toxoplasma gondii, and zombie ants are the more popular examples.

One of the challenges of disease ecology in a wildlife setting is to identify and map how different parasites and pathogens spread and establish a foothold within a population. From influenza to measles to HIV to foot and mouth to real or hypothetical diseases, the modelling is all very similar. The patterns of contact among hosts within a population are likely to play a central role in how parasites spread. A good social network is key to any disease transmission.

Why would the bluetongue lizard make a good animal to study the spread of disease through a population, given its less than social nature? And the more pertinent question of how can a parasite remain successful with an anti-social host? These were the questions that faced researchers at Flinders University in South Australia.

The spread of parasites is one that often relies on the modification of host behaviour, but in the case of the tick and the nematode, the parasite takes advantage of the lizard’s less than social nature.

The tick requires three hosts, and each developmental stage of the tick is on a different host. Larvae, nymphs and adult females each attach to a host, feed and then detach. The detached larvae and nymphs then moult to the next developmental stage. Whereas the female lay eggs that hatch into larvae.

Tick activity and development occur in the spring and summer months when the weather is warm and the lizards are at their most adventurous (lizard activity is at its peak). The tick adopts a ‘sit and wait’ strategy to find its next host. Once detached from its host, it will move less than half a metre to find the next host. It simply waits for the lizard to find it.

The oxyurid nematode has a more astute strategy. Lizards use their tongues to sense environmental cues, and the bluetongue lizard uses its tongue to inspect scats other lizards use to mark their territory. This is when transmission occurs.

Both tick and nematode are working against the clock. The tick must be found by a lizard within a relatively short amount of time (40 days). Whereas the eggs of the nematode are thought to have no more than 10 days to find its next host before they die.

The parasites rely on the more adventurous lizards within the population to be mobile enough to disperse the disease. Those that act as dispersers, wandering from neighbouring settlements. These dispersing lizards behave more cautiously, and are more likely to inspect any scats with its tongue as they move through occupied habitat. And thus, more likely to encounter a parasite.