What do Australia and India have in common? The answer is that they both share one of Earth’s tectonic plates – the drifting eggshell-like pieces of Earth’s crust, on which all of our planet’s continents sit. However, the Indo-Australian Plate is a slightly unusual one, and the two countries may not share it for much longer. Recent Earthquakes beneath the Indian Ocean suggest that this plate may be in the process of breaking in two. 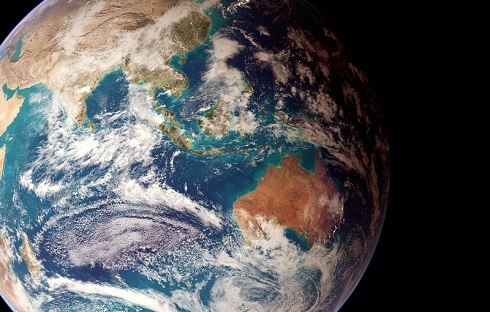 We generally think of the surface of our planet as being fixed and unchanging. The reality though, is that this isn’t true. Earth’s continents and the tectonic plates which make them up are not fixed at all, drifting slowly across the planet’s surface. For instance, as you’re reading this, most of Africa is moving slowly to the North West and quietly tearing the beginnings of a new ocean into Earth’s surface. Meanwhile, Hawaii is moving at a speed of about 7cm per year which is about as fast as your fingernails are growing.

Of course, these movements are tiny, compared to the size of the Earth and its continents, but they still cause pressure to build up in Earth’s surface. Sometimes, seemingly without warning, that pressure continues to build up and– SNAP! Something in Earth’s crust cracks or ruptures. This jostles the plates and can cause earthquakes which rattle entire countries. Any places situated at the edges of tectonic plates are particularly prone to earthquake activity, with California and Japan being high profile examples. With enough quakes, however, dramatic changes can happen in Earth’s crust. On rare occasions, larger tectonic plates can sometimes break apart into smaller ones – and that’s exactly what’s happening somewhere beneath the Indian Ocean right now.

April 11 this year saw two massive earthquakes strike west of Indonesia in quick succession, measuring 8.7 and 8.2 on the Richter scale. The result was a dramatic quadruple fault rupture in Earth’s crust (a rare event which is more or less exactly what it sounds like!) which caused shockwaves to reverberate around the whole planet. Around a week later quakes occurred across the world as the whole planet shivered in response.

Geologists, alarmed by what could have caused such a major event, took to analysing the quake. What they found was remarkable. Within roughly 160 seconds, four fault lines (existing fractures in the rock) tore apart under pressure. Remarkably though, this wasn’t at a plate boundary where this kind of  activity is expected. It was right in the middle of the Indo-Australian plate. To the geologists looking at this data, this was like a smoking gun. A telltale sign that, as many had suspected, this particular tectonic plate is starting to fracture and split into two.

The Indo-Australian tectonic plate is already a bit of an oddity, being a rather thin and unusual shape compared with the others. The reason being that it was formed some 43 million years ago when two smaller plates (carrying the landmasses which would eventually become India and Australia) fused together. Since then though, it’s collided with the much more massive Eurasian plate. That collision has already caused enough pressure in Earth’s crust to create the Himalayas, one of the world’s most impressively tall mountain ranges. However, the Indo-Australian plate is still trying to move northwards. The  western part of the plate is still pushing against the Himalayas, moving at about 3.7 centimetres per year, but the eastern part, including the entire continent of Australia, is moving at a much faster speed of around 5.6 centimetres per year. This is causing the whole tectonic plate to quite literally buckle, which is the root cause behind all of the quakes in the region over the past decade.

So what does this mean for anyone who happens to be living on that plate? Well, there are not going to be any sudden apocalyptic changes. After all, according to theories, this is not actually a new event – the Indo-Australian plate began to deform around 10 million years ago! Over millions of years, a new tectonic plate boundary will start to form under what is currently the Indian Ocean. This will cause thousands of similarly large earthquakes, but over such a length of time that they won’t be much more regular than they already are for those living around South-East Asia. All the same, planetary scientists are likely to continue watching this region with interest over the coming years.