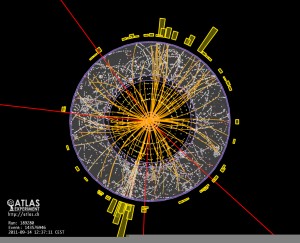 When Peter Higgs steps out onto the tarmac at an airport near the franco-swiss border, it will probably be with equal parts trepidation and elation.

CERN, the European Organization for Nuclear Research, and the world’s leading laboratory for particle physics, is to hold a scientific seminar on July 4th, with Peter Higgs in attendance, to deliver the latest update in the search for the Higgs boson — the famed “God Particle”.

If found, July 4th will signify the culmination and logical endpoint to a paper he authored some forty-eight years ago. A paper published in 1964 that went largely unnoticed at the time. It wasn’t until a few years later that the scientific community began to take note. When in March 1966, a 36 year old Peter Higgs gave a talk at Einstein’s former lab — a prestigious invite for any scientist — he proposed his theory… grand and unifying in the classic traditions of his art.

As an unknown Edinburgh physicist Peter Higgs came up with a theory of how the universe is held together — igniting a race to find it, one that has spanned almost half a decade. He posed the simple question of why the objects around us weigh anything at all, something largely ignored by Newton and his contemporaries.

This week the race might well be over. The seminar at CERN will be followed by a press conference available via webcast at http://webcast.cern.ch/, where physicists will summarise results from 2012.

“Data taking for ICHEP concluded on Monday 18 June after a very successful first period of LHC running in 2012,” said CERN’s Director for Accelerators and Technology, Steve Myers. “I’m very much looking forward to seeing what the data reveals.”

Astonishingly the total amount of collisions and experiments run in the first part of this year vastly outnumber those of last year’s total. “We now have more than double the data we had last year,” said CERN Director for Research and Computing, Sergio Bertolucci, “that should be enough to see whether the trends we were seeing in the 2011 data are still there, or whether they’ve gone away. It’s a very exciting time.”

Finding the elusive Higgs was once described as “using rifle bullets to find billiard balls hidden in bales of hay”. Today’s metaphor perhaps indicates we are getting closer. “It’s a bit like spotting a familiar face from afar,” said CERN Director General Rolf Heuer, “sometimes you need closer inspection to find out whether it’s really your best friend, or actually your best friend’s twin.”

Higgs’s theory, one born as an idea in the Scottish highlands, unnoticed by the scientific community, and a paper rejected by CERN itself all those many long years ago, explains the origin of mass, that mass is produced by a unifying field that holds on to particles, and adding weight to them. All manner of metaphor, simile, and hyperbole have been used to explain the God particle — simply put;  without a Higgs boson you can’t have a universe. It explains the hole in the Standard Model of particle physics, why anything exists at all, and why “Hercules himself will do what he may, why cats will mew, and why every dog will have his day”.