Are you watching the new Cosmos: A Spacetime Odyssey – the scientific documentary television series? I am, and I’m thoroughly enjoying it! The series is a follow-up to the 1980 television series Cosmos: A Personal Voyage, which was presented by Carl Sagan. The all new Cosmos: A Spacetime Odyssey science documentary consists of thirteen episodes and just like the original program, continues to use a storytelling approach to present complex astronomy and science concepts in an accessible and entertaining manner. The episodes feature the latest information which has been updated since the 1980 series and uses substantial computer-generated special effects and animation to illustrate and enhance the narration.

The series is hosted and presented by astrophysicist and science communicator Neil deGrasse Tyson, who was inspired by Sagan as a college student. He created a new version of the series, aiming to reach a wider audience and not just those specifically interested in the sciences.

The entire Cosmos: A Spacetime Odyssey series is dedicated to exploring how we discovered different laws of nature and explaining how scientists found our Earthly coordinates in space and time in relation to the universe and created a vision of the cosmos. Listening to the great narratives, watching the stars, and contemplating the scale of space and time relative to Earth, is enough to humble any scientifically curious soul.

My favourite episode, called “Hiding in the Light”, reveals the compelling and concise story about something as fundamental as light, but it also explores the history and meanings of light discovery, the wave theory of light, and finally the composition of the universe. Narrator Neil deGrasse Tyson leads us back in the history, showing us early experiments from over 2000 years ago including the “camera obscura” (Latin for “dark room”), which was the precursor to the pinhole camera, which was carried out by the Chinese philosopher Mo Tze or as the narrator calls him, “the master of light”. 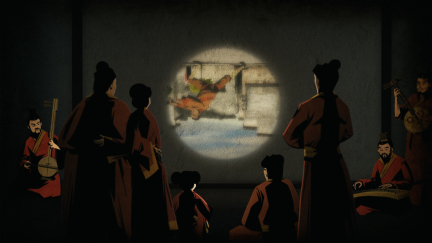 Science needs the light of free expression to flourish,” Tyson observes, while remarking that  “It depends on fearless questioning of authority and the open exchange of ideas.

Then, in the episodes iconic teaching vessel, the computer generated and amazingly animated “Ship of the Imagination”, we travel back in time to 11th century Europe and North Africa during the golden age of Islam, when another master of light, a polymath scientist and astro/physicist Ibn al-Haytham aka Alhazen asked: “How do we see?” Alhazen was one of the first researchers who discovered and used the scientific method. He was the first scientist who understood how we see things visually, and how light travels in straight lines. And perhaps most importantly, Alhazen was the first scientist who contributed to the field of optics and used the postulates of the nature of light in a practical application, that later lead to the concept of the telescope.

By Alhazen’s time, Arabic astronomy was very influential: from the concept of Arabic numerals – such as the introduction of the concept of zero (0) as a number to developing the first postulates for the scientific method. As a result, one could say that Arabic was the origin of the language of science.

Several hundred years later, an English physicist Isaac Newton, who was first to decipher the “mystery of rainbow”, performed his famous prism experiment by using dispersion through prisms. Newton demonstrated that light was composed of the visible spectrum. This led him to conclude that colour is a property intrinsic to light. Also, Newton was known to be the first scientist to build the first practical reflecting telescope which unlike Alhazen’s directly observing optical telescope, used reflective surfaces to allow observation of astronomical bodies otherwise not observable via direct observation.  His theory of colour was based on the observation that a prism decomposes white light into the many colours of the visible spectrum. He named the colours of light the spectrum.

Later, in the 19th century, an astronomer named William Herschel discovered that there were “colors” of light in the spectrum beyond what human eyes could detect. Also, he noticed that some colours of light have more heat than others. He tested the relationships between the colour of light and the heat associated with each color and first postulated that light consisted of infrared rays. He was first to detect, after further experimentations, that there must be an invisible form of light beyond the visible spectrum.

Joseph von Fraunhofer, a German optician, and master in designing high-quality lenses for telescopes and microcopes, discovered that by magnifying the spectrum of sunlight, gaps in the spectrum could be observed. Those are absorption lines, called “Fraunhofer lines” that uniquely correspond to specific atomic elements. This effect is the basis for the use of astronomical spectroscopy to determine the composition of distant stellar objects. These discoveries are enabling astronomers to make observations about the composition of stars and planets through the lines, as well as observing the motion and expansion of the universe. Who would have guessed that so many secrets of our universe are literally hiding in the light?

After travelling through time and space in his Ship Of The Imagination, to explore and explain the scientific work of Isaac Newton, William Herschel and Joseph von Fraunhofer, our Cosmos narrator winds up in modern times touching on big questions contemplated by modern astronomers. He explains lightwaves and soundwaves, focusing on the concepts of light wave theory. Light theory, he says, “branches in to the physics of quantum mechanics, which was first conceptualised in the twentieth century.” Tyson emphasized that the marriage of physics and astronomy – brought about the birth of astrophysics, which, in turn, brought the stars much closer to us.

By the end of the episode, Tyson concludes with the wonderful sequence set against the musical background of George Gershwin’s Rhapsody in Blue, with an image of New York City in the background, to brilliantly describe how it is to see the universe in all the different varieties of light including the visible, infrared, ultraviolet, X-ray, gamma ray, and microwave spectrums, and even a radio image.

All these stories collectively made one of the strongest episodes in the Cosmos series. DeGrasse Tyson shows us that every time we look at the night sky using a different part of the spectrum, we can learn something new, and how so much about our universe is written in the code, demonstrating how a key to the cosmos is hidden in the light.

What I really like about this series is how the program’s unique method of using scientific storytelling reveals to viewers how the universe is stunningly vast and magnificent. I also appreciate how the most fundamental of scientific concepts are presented with clarity, wonder, and passion without neglecting the emotional, intuitive and spiritual perspectives.

I hope that the Cosmos is inspiring for you on both an educational and scientifically passionate level. I believe they are inspiring to any audience; because to me, they seem to be designed to bridge the gap between the academic community and the general public.

Through the episodes comprising this new version of Cosmos, the story of science and the sparks of curiosity, the discovery of the things we cannot see, and the sharing of knowledge are presented as much deeper and more powerful than we could properly perceive in earlier times.