Thousands of signatures have now been presented in person to the Faroe Islands Government. Add your voice to this petition to keep up the demand until this cruel whale slaughter is banned. 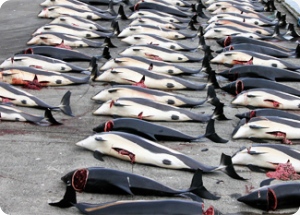 Hundreds of pilot whales are slaughtered every year on the Faroe Islands, a small group of islands north of Europe. Faroe men go out with boats to drive these animals into a fjord using nets to block their way back to sea. The whales then beach themselves, or are pulled ashore with a blunt hook lodged in their blowholes. Once beached and defenceless these whales are killed by having their spinal cords and major blood vessels cut. It can take up to three and a half minutes for a whale to eventually die.

Other than pilot whales, several species of dolphins are also killed using these same methods.

Due to the harsh climate that makes it difficult to grow food on the Faroe Islands, the meat and blubber of these animals was once an important part of the diet of the Faroe people. But nowadays their food supply is diverse and plentiful, the cruel whale and dolphin hunt continues primarily for the sake of ‘tradition’.

Please show the Faroe Islands that the international community is strongly opposed to this cruel slaughter by signing this petition to the Faroe Islands Prime Minister. Petition Tally by  August 16 2012: 81,718 signatures.