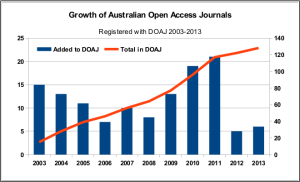 John Shipp, a University Librarian from the University of Sydney in 2006 had given an account of Open Access in Australia which can be accessed here. In his article, Mr. John mentions about the Australasian Digital Thesis Program (ADT) has 5,391 full text files were available in mid-January 2006. Currently Australia has 71,880 thesis online and available via the National Library of Australia, Trove.

The OAK Law project which had ended in 2009 had set up a database of all the publishers open access policies and publishing agreements. A similar database known to SHERPA/RoMEO publishers’ copyright policies is also existing at Univeristy of Nottingham, UK. These lists are facilitating researchers about what and how to share their research outputs legally with the cosmos.

According to the Registry of Open Access Repositories (ROAR), approximately 82 repositories are existing in Australia with Australasian Digital Thesis Repository of Tasmania being the oldest and Monash University Research Repository the recent one.

Support of Open Access in Australia is led by AOASG and Open Access Austalia group on openaccessweek.org