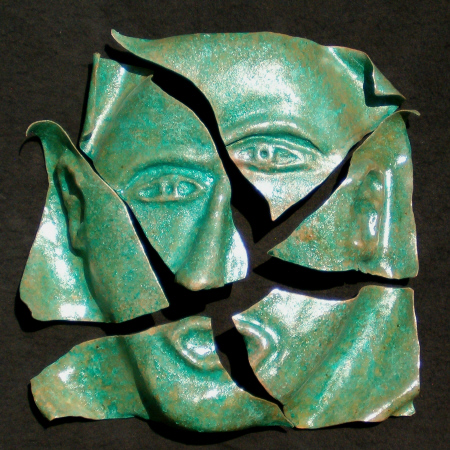 I do not think I would be alone in fearing ‘losing my mind’. Even the common expression, “are you out of your mind?” gives solid form to what may seem a merely philosophical train of thought. At any given time most people will declare confidently that “I am in my ‘right mind’ and point to themselves as that ‘I’. The quandary is the ‘I’ of age eight is different to the ‘I’ of forty-eight; despite the continuity of of ‘I’ joining these two for example. Our mind then is one of those puzzling concepts at once both familiar and ephemeral.  To lose ones mind, though, even partially, through trauma, disease, or disorder we would all agree is to lose some quintessential part of us. Trouble In Mind is a collection of real stories about people who have suffered just that – losing part of their minds.

The stories are from patients that the neuropsychologist author, Jenni Ogden, has worked with over her career in New Zealand, the USA, and Australia. Ten of the 15 patients portrayed in this book featured in Ogden’s 2005 textbook Fractured Minds. Trouble in Mind is neither text, nor assessment, nor treatment book. There are other books on the market that describe patients with a variety of neurological conditions. Many written by clinicians such as Ogden. Most I find fall short because the clinician writer is excited by the condition and fails to connect the human to that condition. In other examples non-clinicians often focus complete cures, without any reference to the many that underwent similar treatments – without success.

Ogden’s stories succinctly and clearly explain the medical conditions and engagingly present the human side of each in an empathetic and nuanced style. Whether talking about patients with car-crash brain trauma, rugby-induced concussion or suffering from Parkinson’s disease Ogden covers the personal, social and family elements with clarity that is often missing in clinical based non-fiction written by clinicians. In this respect Ogden writes with feeling like that of psychologist Oliver Sacks at his best.

These are stories that will have a resonance with most in our society. Three in particular I will mention as way of illustration of the breadth covered. Michael was a 24-year old motorcycle maniac. After a horrific accident, he left the critical care unit with a virtually ignored head injury; the surgeons had grappled with keeping him alive and the extensive orthopedic surgeries and specialist care.  neither he nor his doctors realised that he was cortically blind. This resolved itself after two years – leaving him with object agnosia – the inability to recognise what he was seeing. Ogden then describes he many years work with Michael, his trials, tribulations and treatments to living 24 years later is a life with a most interesting disability. Amongst this we also get Ogden’s motivation – her clinician’s ‘delight’ in being asked to work with such an unusual case. Yes her delight, her excitement; those real human emotions not hidden behind neutral, banal psychology speak.

In another chapter Ogden looks at the bizarre neuropsychological disorder of hemineglect – ignoring visual stimuli in the side of space opposite to the side of their brain that is damaged. In this case though the patient is a chirpy 50 year-old female, Janet. The chapter is fascinating and the description of janet’s sessions with Ogden are sometimes, well, hilarious. But this is real-life not Hollywood. Janet’s hemineglect is caused by a brain tumor. Janet dies, four long and difficult years following her diagnosis. Ogden doesn’t just end the chapter, she humanely discusses the impact on Janet’s husband and close family and friends of her treatment and death. She also assesses the effectiveness of the treatments, looking at other cases, from her own and others’ casebooks.

The final chapter is aptly called “The Long Goodbye: coming to terms with Alzheimer’s disease.” This chapter follows Sophie’s diagnosis and cognitive decline from Alzheimer’s disease. I learnt a lot about the disease from reading this chapter. I equally learnt how it would be to watch a person who “was once active, independent, intelligent, humorous and loving gradually lose her mind”.

This collection of stories is eminently readable. I  recommend it to readers with either; a specific, perhaps personal, topic of interest or those more generally who are curious and interested in how our minds work, particularly when they go awry due to damage to that squishy grey organ inside our skull.