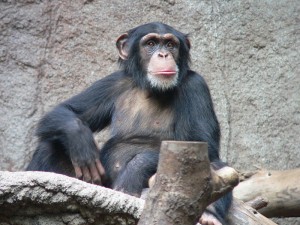 The midlife crisis is more complicated than first thought. It might be time to stop blaming troubled marriages and feeling obsolete in a sea of younger colleagues. A study published in the Proceedings of the Natural Academy of Sciences has revealed that chimpanzees and orangutans also experience a midlife crisis.

Having a midlife crisis may not just be the result of a troubled marriage or the thought that life may be halfway over. It might be part of primate biology. That’s right, hardwired into us.

Economist Andrew Oswald told ABC Science that it might be beneficial.

“Maybe discontent lights a fire under people, causing them to achieve more for themselves and their family.”

Danielle Spencer runs a science club at Mitchelton State School in Queensland and explored where gender stereotypes in science began. Where does the perception that men do the “hard” sciences and women do the “soft” sciences come from? A group of 45 primary school students were surveyed and it was found that a majority of students thought that science was accessible to both genders.

When asked why there are more men than women in engineering roles, the students responded with gender based answers like “Girls like dancing and other jobs.” and “Women are more suited to caring and developing jobs like childcare and nursing.”. There was no response that challenging this observation. This was despite 75% of the group thinking that science was accessible to them. It is disheartening to hear.

Students were asked whether their science club should be split into a boys only and girls only science club, there was overwhelming support for a combined science club. There was an appreciation and acknowledgement that irrespective of gender, everyone had a valuable contribution. At the moment this cohort of students believe that science is something that everyone can do. The question remains though, how do we get adults to believe this?

As this week drew to a close, attention focused on NASA’s Jet Propulsion Laboratory in Pasadena, California. A story broke at NPR reporting that the Curiosity Rover may have found some exciting news. Project Scientist at the Mars Science Laboratory, John Grotzinger was quoted to saying:

“We’re getting data from SAM as we sit here and speak, and the data looks really interesting.”

SAM, the Sample Analysis at Mars  is a miniaturised chemistry lab. On board is a Gas Chromatograph, Quadrupole Mass Spectrometer, Tunable Laser Spectrometer as well as sample processing systems that allow heating and chemically treating samples. Normally these instruments would fill the space in a laboratory but on Curiosity it’s around the size of a microwave. SAM is being used to collect information about the past and present chemistry of Mars. As well as this SAM is also identifying organic and inorganic chemical molecules known to be important to life on Earth.

So what has SAM found? Nothing has been confirmed but it does sound like there is something especially when Grotzinger says:

“This data is gonna be one for the history books.”

We will have to wait at least several weeks before NASA makes an announcement.

New Zealand’s volcano, Mount Tongariro made it into this week’s news with an eruption on Wednesday. Luckily there have been no reports of damage or injuries. However, a group of travellers and journalists hiking at the time witnessed and filmed the eruption.