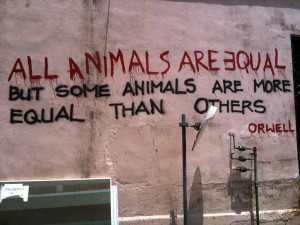 It happened over ten years ago. Jimmy was incarcerated against his will, held in a cage, isolated, and denied the basic freedom he deserved. A Habeas Corpus request was put in on his behalf. A long ordeal involving lawyers and various international organisations.

It happened again last year, in San Diego USA, Tilikum, Katina, Kasatka, Ulises and Corky were all held captive. A lawsuit was filed at a federal court, declaring that they were being held as slaves in violation of the 13th Amendment to the US Constitution (the amendment that abolished slavery and involuntary servitude after the American Civil War).

One simple fact made these two cases unique — none of the subjects were human. Jimmy was a Great Ape. Tilikum, Katina, Kasatka, Ulises and Corky were all orcas. Those were not the first, and certainly not the last.

In 2005, a public prosecutor, Dr. Heron Santana, was involved in the landmark, bench-setting case that would provide the framework for all those that came after. As was the case with Jimmy, a Habeas Corpus was demanded for a female chimpanzee — Suíça, 23 years old, who had lived in a zoo for four years. What transpired made Suiça the first animal to be recognized as a subject in a court of law. In the end, the Habeas Corpus was approved — unfortunately, it was on the day after she was found dead in her cage.

Animal activism had always existed before then. But perhaps that was the spark the trend needed. Indeed, numerous examples now exist, including perhaps the most well known — the World Declaration on Great Primates, that proposes the extension of rights allowance in an equal way to all great primates: human beings, chimpanzees, bonobos, gorillas and orangutans, and identifying the three basic conditions to the relationship between humans and great primates — the right to life, individual freedom, and prohibition of torture.

With chimps and other great apes the difference is clear — “the only difference is that they do not talk” explained Pedro Ynterian, biologist, activist and founder of a chimp rehabilitation sanctuary near Sao Paulo.

But the question and debate goes further than one of simple animal activism. The question points towards eventual representation of all non-human entities. The possibility that our rules of law and humanity will need to be rewritten is becoming more apparent.

What we witnessed with Suíça, Jimmy, Tilikum, Katina, Kasatka, Ulises and Corky is that there is a slow convergence of two seemingly distant traditions —  democratic theory and animal rights. Take that convergence to its furthest logical conclusion and what you have is the possibility of including non-human nature within our human spheres democracy.

In reality, this is nothing new.

Half of democracy is participation… the other half is representation.

The boundaries of our democracy have never had any set limits and have never been static. At any point in time throughout our history certain categories of people have never been shown inclusion within the democratic circle. Women, ethnic minorities, blacks, gays. Another spin on this central theme and we can include children and young adults on that list (where they are not afforded democratic rights, their parents are used as a proxy).

The affording of democracy and human justice to non-human entities is not really anything new, but it is certainly a theme gathering momentum, especially in this age of sustainable living. The IPCC (Intergovernmental Panel on Climate Change) — a body whose sole purpose is “to provide the world with a clear scientific view on the current state of knowledge in climate change and its potential environmental and socio-economic impacts” — is essentially a body that speaks on behalf of another non-human entity (mother Earth’s climate). The science pertaining to that feeds up to policy and governments and nations create and forge laws on behalf of the world we live in (at least, that is the idea).

Biodiversity is perhaps the next great frontier of representation — the other sentient beings on this planet, endangered or otherwise have certain bodies and groups that lobby and speak on their behalf. In June, we learnt that a certain number of species within the Brazilian rainforest are on the brink of extinction. The data presented in that paper compels the Brazilian government to do something about it.

So why not extend our laws of human nature and democracy to all non-human entities? Historically, discrimination on the grounds of sex and skin colour are purely arbitrary characteristics on which to base the attribution of rights. In this day and age, is the species boundary any less arbitrary? Perhaps it is.

It seems genuine to argue how can we bestow democracy on those that do not partake in it? Since, one tenet of democracy insists that you partake in it.

Democracy, first and foremost, is concerned with the representation of interests.

Women were represented by their husbands, slaves were considered property, and children’s rights were deferred to parents. In all cases a proxy was used. A proxy that, however misguided at times, represented their interests. So in the case of nonhuman entities, it’s not a stretch of the imagination to find a scenario where partaking in democracy isn’t as important as representing their interests. And certainly a case that doesn’t require the non-human entity to be bestowed with any intelligence or consciousness.

But what would a democratic non-human world look like. To be honest I do not know, but certainly one that needs more thought. But perhaps it would be a good way to frame the “sustainable living” generation we and our policy makers are now embarking on.

Imagine a future where a political candidate is campaigning for votes. But he’s not campaigning on behalf of his constituency, you, or a certain voting block of people, he’s not campaigning to garner the republican vote, or the leftist vote… he’s campaigning on behalf of graphs, tables, and data showing you why a non-human entity’s voice counts more than yours. Scientific evidence speaks on their behalf. His case is compelling. Afterall, our science has always been presented as having direct and privileged access to the truth, unhindered by the erring hand of humans or non-humans alike. The same way a politician will speak, with unearnt God-given authority, of and for his constituents.

Science, and most importantly, scientific evidence plays a vital role in the societal and political discourse — giving new meaning to the phrase “no science, no truth, no evidence, no democracy.”

1 thought on “The rise in representation of non-human entities”