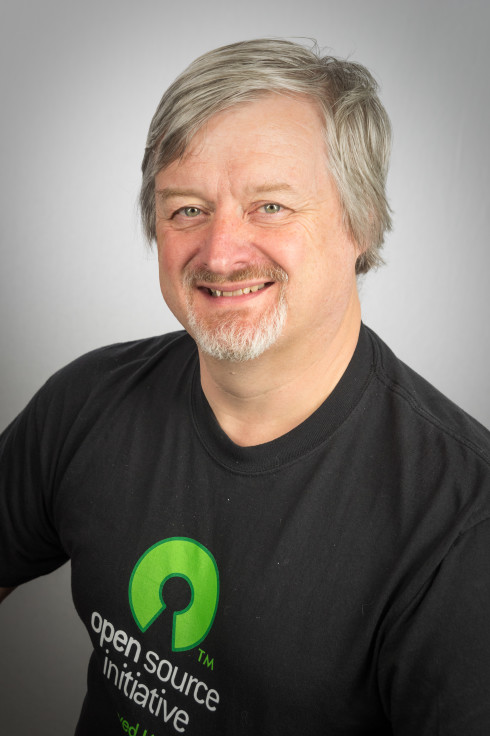 One could call Simon Phipps a real eclectic geek, having in mind his background and activism globally: from campaigning for digital liberties, open data, open source software and political transparency, through his columns at InfoWorld to presidenting at the Open Source Initiative.

Simon studied electronic engineering at the University of Southampton, after which he worked for IBM, being involved in introducing the Java programming language, then he was leading Sun’s open source projects for Sun Microsystems – where he also worked on open source licenses. When Sun Microsystems and Oracle merged in 2010, Simon joined ForgeRock startup as Chief Strategy Officer. Now, he heads his own consulting company, Meshed Insights Ltd.

He is the president of the Open Source Initiative (OSI) since 2012 –  the non-profit organisation that advocates for open source software and builds bridges between open source communities and maintains the open source licenses. Also, he is a board director at the Open Rights Group in the UK and on the advisory board of Open Source for America.

Simon has been giving talks at many conferences on open source, free software, digital rights, etc. I had a chance to meet Simon couple of years ago in Oxford (UK), at the Transfer Summit conference on open innovation, development and collaboration, and ever since I’ve been following his work online and offline.

Welcome to Australian Science. Would you, please, tell our readers a little bit more about yourself? Where do you come from, both geographically and philosophically?

I’m originally from south London but have lived in Southampton for 35 years. I’ve been programming computers and making electronics since I was a teenager, with other interests in general science. I’ve always been fascinated by networks and the capacity for action at a distance, so my career has embraced many aspects of both.

Back in the days of Sun Microsystems, you were leading Sun’s open source projects, and later got involved in the Open Source Initiative. How did you initially get interested in open source software?

At one point I ran a company that helped programmers create and distribute software as Shareware. I realised most people who use software could be trusted to support the developers behind it; our business was successful as a result! That opened my eyes to the deeper reality that underlies open source software. If you remove the obstacle of needing permission to contribute, a community will naturally collaborate to create what they need individually and share it with everyone else. So when I arrived at Sun from IBM, I already believed that open source was a crucial part of the new society emerging because of the Internet. At Sun I was privileged to oversee the relicensing of pretty much the whole of Sun’s software portfolio, including Java, identity management, Solaris, and much more. The legacy we created is still important, especially the code that has ended up as LibreOffice and the ongoing releases of Java under the GPL.

Would you explain to our readers what do Open Source Initiative (OSI), beside promoting open-source software, do for the Internet, science, research, and academia?

OSI was formed in 1998 as the steward of the then-newly-coined “Open Source” concept. It checks that copyright licensed labelled “open source” really do deliver the freedom to use, study, improve and share software source code. The OSI’s evaluation of licenses is globally respected and provides a benchmark that’s written into law and policy in many countries.

It’s becoming increasingly apparent that open source is crucial to the ability of governments to control their own systems and the budgets that fund them. I believe all tax-funded education and research should result in assets licensed under open source license (or creative commons licenses for other works). Restrictive copyright licensing gets in the way of innovation, especially in the meshed society that’s created by the Internet where creativity comes from unexpected combinations of participants. No responsible authority or institution should tolerate it, let alone promulgate it.

Would you tell us more about your role within OSI organization?

I was elected President of OSI in 2012, a role which involves chairing Board meetings and shaping the agenda and direction of the organisation. My vision in that role has been to turn OSI from a body with its scope limited to just licensing into a membership organisation empowering people all over the world. We’re well on the way to achieve that transformation; we now have hundreds of individual members, more than 25 affiliate organisations and many corporate sponsors. We’ve been able to hire a General Manager and fund infrastructure development, and as a result have been able to be much more active both in the public sphere — resisting software patents for example — and in supporting community initiatives. As an example, we are now fiscal sponsors for the OpenHatch project.

You are also a member of the Board of Directors and an activist at Open Rights Group (ORG), an organisation that promotes the openness in a society, free from unaccountable surveillance and censorship. Can you share with us some challenges you (or your colleagues) faced along the way, and the outcome?

The work at ORG is hugely important. The political systems of the world are set up to regulate and enable economies based on hierarchies of control. But the Internet is bringing about a “meshed society” — where every person is potentially able to work with any other person in any role — that routes around hierarchies. The new meshed society is just as — perhaps more — innovative and creative as the hierarchical, industrial society it replaces. The instincts of the commercial winners of the industrial age coupled with the legal system we inherit from it mean increasingly we see misapplied laws around intellectual monopolies.

ORG campaigns for legal reform that reflects the rights of citizens to use, make, re purpose, celebrate and share their culture and innovation. We’re constantly challenging biased and misapplied law around domain seizures, copyright takedowns, peer-to-peer sharing, music and movie remixes and so on. Meanwhile, global treaty organisations are also trying to protect themselves from the meshed society by driving secret trade treaties like ACTA, TTIP and so on.

Fortunately people around the world are waking up to the problem and funding rights defenders like ORG, EDRi and EFF. Each organisation would welcome your support.

What is the solution to the world wide spread problem of institutions (including scientific and educational ones) who are (un) intentionally biased against open source software adoption, and implementing them into their organisations?

The key is for institutions to realise that restrictive licensing of anything (software, research, data and more), far from raising extensive funds, actually restricts innovation and success by placing an obstacle in the way of collaboration. Instead of being able to follow any research insight freely, restrictive licensing demands permission-seeking that in turn steers innovators away from the resources involve.

If you want to expand knowledge, advance innovation and enrich society, remove the barriers to each by using open licensing and open access for all research and deliverables. I think that’s being increasingly understood; indeed, people have started abusing the word “open” and applying it where it does not ring true to hide their restrictive behaviour!

Thank you Simon for taking your time to talk with me. Thank you for the Interview!