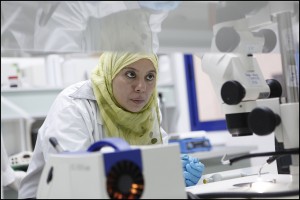 Paris, France — March 2012. The auditorium is filled to the brim — from the doors to the pulpit. High school children at the back, dignitaries at the front. Looking around you get the sense of a grand occasion in waiting. Shirts, ties and smart casuals. In true international style, headphones are available — the proceedings will be translated into French and English.

We are within the halls of the Institut Pasteur, right in the heart of Paris. A place whose name signposts the amount of history that comes along with it. In his time Louis Pasteur made some of the greatest breakthroughs in modern medicine. You get the sense something on that scale is about to happen.

Six empty chairs sit on a raised stage at the front of the auditorium, below a presentation screen with two logos and four words. The logos are unmistakable. L’Oreal and UNESCO have come together “For Women In Science”.

This year L’Oreal and UNESCO will honour 20 women scientists. Five will receive the highest honour presented by UNESCO Director-General Irina Bokova and Chairman of the L’Oreal Foundation Sir Lindsay Owen-Jones.

Today, however, was all about 15 International Fellowships that have been awarded to young women researchers in the life sciences, at the doctoral or post-doctoral level, whose promising projects have been accepted to be hosted by a prestigious institution outside their home country.

Alice Dautry, nothing more apt than being the first female Director-General of the Institut Pasteur, began the proceedings; “You are the ones that will make tomorrow our future”.

The sense of purpose was evident. Not only from those behind the scenes but from the fellows themselves. On more than one occasion the phrase “save lives” was used, and with little hyperbole or grandeur. The matter-of-fact attitude that a dedication to science brings.

Those 15 International Fellows had the hardest task of all; to summarise their winning research proposals into a three minute presentation. At least at this ceremony there would be no orchestra to play them off the stage.

In those three short minutes you get a sense of the breadth and depth of research projects, chosen on the basis of scientific merit. From infectious tropical neglected diseases, to whale flu and naked viruses.

Each presentation was unique, with the fellows exhibiting a sense of oeuvre normally withheld for artists and painters.

“I cannot think of any better use of my time than to be a scientist” remarked one fellow before explaining the intricacies of shrimp viruses in Indonesia. “Shrimp are the most popular seafood” she remarked, before adding “unless you’re allergic”.

We learnt of the medicinal value of Namibian Devil’s claw, of how bats do more for us than we realise — the astounding statistic of killing 1600 mosquitoes per hour. In amongst the slides of diving in the caribbean sea in order to reconstruct the genetic history of chocolate-chip sea cucumbers, and explanations on how the parenting skills of oysters relates to all the world’s problems, the fellows reflected on science and their lives with verve and enthusiasm.

We wouldn’t be in France if Marie Curie’s name wasn’t mentioned. And the little known fact that Marie Curie had two daughters, of which she would lament the fact that she could not be with them while being in the laboratory at the same time. A burden women in science still face today.

As such, to finish, every year a Special Fellowship award “In the footsteps of Marie Curie” is given out to a former fellow, who since receiving her fellowship has demonstrated excellence and determination in the pursuit of her career in research. Mounira Hmani Aifa is this year’s winner. Today she is Associate Professor in Human Molecular Genetics at the Faculty of Sciences, and Researcher at the Centre of Biotechnology, Sfax, Tunisia.

When asked what would be the single most important advice she would give to those scientists that received their awards today, she simply said “Don’t give up. Keep going. Don’t stop.”