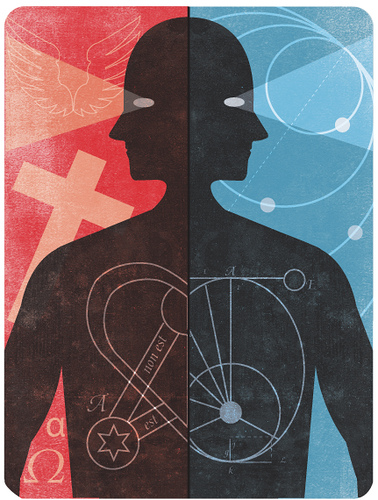 If I let go a hammer on a planet having a positive gravity, I need not see it fall to know that it has, in fact, fallen. – Spock, “Court Martial,” Star Trek, stardate 2948.9.

I recently viewed the film Salmon Fishing in the Yemen. Dr. Jones, (brilliantly played by Ewan McGregor), has been ordered by the Ministry of Fisheries to undertake this farfetched project of introducing salmon into the Yemen River, wholeheartedly, or be out of a job. Dr. Jones reluctantly agrees but continuously ridicules this idea based on his years of research and meticulous study of salmon. He casts doubt every chance he gets that this project will actually work. And what we actually have here is a case of policy dictating science; in the name of a heartfelt, goodwill story meant to assuage the voting public’s uneasiness with the war. (A totally different issue of debate, which I will not touch on here.) It’s not until Dr. Jones meets Sheikh Muhammed, a deeply spiritual man of faith that he begins to open up to another way of thinking, one that defies all his principles of scientific reasoning. And he embraces that this plan just might work, with farmed salmon no less. But what causes the radical reversal of the scientist’s viewpoint from staunch biological reasoning to faith that this project might actually be possible?

Science and religion have had something of a love-hate relationship, intertwined for centuries and often at direct odds with each other. Popes and bishops issued condemnations and accused some great scientific minds of heresy in the Middle Ages. The work of Galileo, Conrad Gessner and Charles Darwin also come to mind, having caused quite a ruckus of controversy in their day. And well Darwin may always be at odds with some folks.

From my own experience growing up Catholic and pursuing biology and chemistry in college, I found it difficult to compartmentalize science and religion. But there have been and still are a few scientists out there who can separate their scientific beliefs from their religious practice. Copernicus was a Catholic clergyman; Gregor Mendel was an Augustinian friar; and Georges Lemaitre, who first proposed the Big Bang Theory, a Belgian priest. They seemed to have been able to separate their work from their spiritual beliefs. Perhaps they had truly find enlightenment? Or maybe that’s exactly what it is; just a spiritual belief, for right or wrong, that has nothing to do with science.

As with most conflicts, it seems that the bitter clashes between science and religion arose primarily due to a different interpretation over the definition of ‘science’. Secular philosophers considered science in the sense of natural science; while theologians took the view that all science is based on demonstrations – according to the St. Thomas Aquinas viewpoint. The shift toward science becoming the top dog, so to speak, over religion seems to have occurred as Europe and North America experienced greater secularization. The political power and influence of the church relating to scientific research has gradually decreased. According to the Catechism of the Catholic Church: “Methodical research in all branches of knowledge, provided it is carried out in a truly scientific manner and does not override moral laws, can never conflict with the faith, because the things of the world and the things the of the faith derive from the same God. The humble and persevering investigator of the secrets of nature is being led, as it were, by the hand of God in spite of himself, for it is God, the conserver of all things, who made them what they are”. I will leave it up to the reader to ponder that and agree or disagree.

But let’s explore the concept of faith for a moment. The word faith is thought to date back to the early 13th century, around the time of some budding scientific discoveries. Formally, faith is a belief in one or more gods or in the doctrines of religion. Buddhism, Christianity, Judaism, Sikh, Hinduism, Islam – all of these religions have some concept of faith stationed at the root of their core beliefs. Informally, it can mean a trust or belief without proof, a hope. And this is where the criticism starts, over this very definition of faith, and how it can seem at odds with science.

Critics argue that faith is opposed to reason, while advocates argue that faith addresses questions that cannot be settled by evidence. The evolutionary biologist, Richard Dawkins stated, “Faith is the great cop-out, the great excuse to evade the need to think and evaluate evidence. Faith is belief in spite of, even perhaps because of, the lack of evidence.” While Dawkins is an outspoken atheist, his understanding of the natural world and contributions to genetics and belief in the rigorous scientific method cannot be discounted.

Faith is a truly personal feeling, whether tied to a religion or not, and we cannot say with certainty what caused Dr. Jones’s shift in thinking on the salmon project. It could have been any number of things happening in his life, consequentially circumstances all tied to emotion, and not science. Sometimes when all else fails, all you have is hope and faith that something will work out. How can you explain a child surviving cancer as the tumor miraculously disappears? There are instances where science cannot explain all things, there is an unknown we cannot account for, one we cannot reason for, and scientists have a hard time admitting this.

Perhaps faith is just a hope that some crazy scheme like transporting farmed salmon to the Yemen River will actually take hold, creating a sport fishing industry and lush farmland to inspire a new economy. Perhaps it’s a question that we will never have the answer to, and must simply accept. Maybe when it comes to science and faith there is no right or wrong answer. However, it does support the argument that you won’t know unless you try, (and try again), which directly supports the basis for scientific research. Whatever faith is, it reflects the need to respect the beliefs of others, while forging ahead with the scientific work of provable and verifiable results that keeps us progressing forward toward a more perfect society.