On November 19, the Oxford Dictionaries announced that “selfie” had been deemed their Word of The Year. The term, whose first recorded use as an Instagram hashtag occurred on January 27, 2011. It was actually invented in 2002, when an Australian chap posted a picture of himself on an internet forum and called it a “selfie”. Devices for taking photos of oneself have been available for many years prior to the proliferation of the smartphones responsible for this phenomenon. This means the history of the selfie dates back to the origins of photography itself. 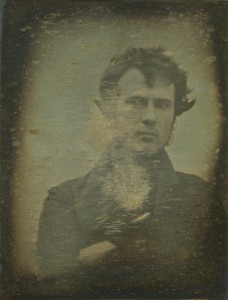 As the Public Domain Review notes, the first recorded example of the selfie harkens back to what may have been the first photographic portrait. In 1839, a young Philadelphia chemist named Robert Cornelius stepped out of his family’s store and took a photograph of himself.

He took the image by removing the lens cap and then running [into the] frame where he sat for a minute before covering up the lens again. On the back he wrote “The first light Picture ever taken. 1839.”

Cornelius’ striking self-portrait was indicative of his knack for photography; an entry in Godey’s Lady’s Book from 1840 reads: “As a Daguerreotypist his specimens are the best that have yet been seen in this country, and we speak this with a full knowledge of the specimens shown here by Mr. Gouraud, purporting to be, and no doubt truly, by Daguerre himself. We have seen many specimens by young Cornelius, and we pronounce them unsurpassable—they must be seen to be appreciated.”

As a final consolatory note to those linguistic stalwarts whose blood boils at this bit of Australian slang entering the lexicon, have no fear—the Oxford Dictionaries Online is very, very different than the Oxford English Dictionary.