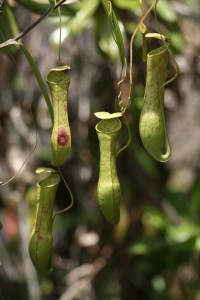 In the fields of Brunei Darussalam in North Borneo, once a crown colony of Great Britain, lies the pitcher plant. The pitcher plant is carnivorous, capturing and devouring insects that seek to harvest its nectar.

The pitcher plant is beguiling, attractive, and has evolved many ways to seduce its predator. Insect prey is captured within the wells of its pitcher-shaped leaves, when insects crawling along it slip on the wax crystals of the inner wall, and fall into the digestive fluids at the bottom. A dense layer of platelet-shaped wax crystals, orientated perpendicularly to the surface for a reason — to essentially make it difficult for insects to grip — especially when wet.

The wax crystal layer is a common feature to many species of the pitcher plant. One such species, Nepenthes gracilis, is unusual in the fact that the crystals are also present on the underside of the pitcher lid.

This was the observation that led to recently published research describing a new way the pitcher plant captures its prey.

The lead author of the paper, published today in PLoS ONE, Dr Ulrike Bauer from the University of Cambridge’s Department of Plant Sciences, said: “It all started with the observation of a beetle seeking shelter under a N. gracilis lid during a tropical rainstorm. Instead of finding a safe — and dry — place to rest, the beetle ended up in the pitcher fluid, captured by the plant. We had observed ants crawling under the lid without difficulty many times before, so we assumed that the rain played a role, maybe causing the lid to vibrate and ‘catapulting’ the beetle into the trap, similar to the springboard at a swimming pool.”

In effect, it’s a clever strategy on the part of the pitcher plant. At times, mostly when the weather is dry, insects have no problem gathering nectar from the plant. This allows “scout” insects and ants to report back and ultimately means a larger number of insects are on their way back to the plant.

The trap is set.

In that field in Borneo it was a Coccinellid beetle that fell for the trap, being flicked into the well of the pitcher by a raindrop that bounced off the lid of the plant. The beetle had sought shelter from the rain but had found its ultimate demise instead. Researchers posited that the wax crystal layer, while providing a secure foothold under normal conditions, causes insects to detach more easily under sudden impacts.

Researchers replicated and simulated rain in the lab and its effect on ant colonies trying to gather nectar. Comparing this to real in-the-field settings showed that the lid itself goes a long way to contributing to prey capture.

In the fields of northern Borneo the rains are brief, heavy and intermittent. And the pitcher plant — with its canopy-like lid — makes an attractive refuge from the deluge. But the most interesting part suggests that N. gracilis uses much more than its simple lid to capture insects — but has also re-upped its nectar secretion in a way that increases attraction of its prey to the lower lid surface. As other species of pitcher plants, those without wax crystals on the lid, secreted significantly less amounts of sugar.

As with all things to do with science, we are only just beginning to scratch the surface. Undoubtedly, the pitcher plant has many more evolutionary tricks up its not-so-preverbial sleeve to ensure it never goes hungry.

1 thought on “The pitcher plant, the beetle, and relying on rain for your next meal”