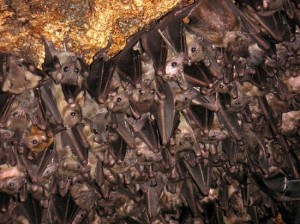 This first week of October there seemed to be a recurring theme — one of birthdays. On the 1st Nigeria celebrated 52 years of independence, followed closely Germany celebrating unity on the 3rd. But possibly the oldest this week had to be the birthplace of tropical medicine — the London School.

“On the 2nd October 1899 the London School of Tropical Medicine at Royal Albert Dock opened its doors to 11 students. An inaugural address was given by Patrick Manson which discussed issues around the lack of training in Tropical diseases and the need to increase knowledge and awareness.”

We all know the equation. Perhaps a lot less can actually tell you what it means. And then there are those special few that can decipher it, mathematically speaking, that is. Terence Tao, a name befitting of a mathematician, revisits the famous equation.

“Whereas Einstein’s original argument considers a mass emitting two photons in several different reference frames, the argument here considers a large mass breaking up into two equal smaller masses. Viewing this situation in different reference frames gives a functional equation for the relationship between energy, mass, and velocity, which can then be solved using some calculus, using the Newtonian approximation as a boundary condition, to give the famous

This type of blog post should come with a warning: not for the faint of heart — serious mathematics within. The type of maths that is spelt with a capital µ

Foreign Policy isn’t usually the place you’d expect to read about the intersection between popular culture and science. But there it is, right there in font size 12. Michael Peck writing in Foreign Policy spoke with Chris Weuve, a naval analyst, former U.S. Naval War College research professor, and an ardent science-fiction fan about how naval warfare is portrayed in the literature and television of outer-space. What results is a compelling interview, analysing parts of Babylon 5, Star Trek, Firefly, science fiction, and naval history.

“FP: So how would actual space war differ from naval warfare?

CW: That’s hard to say, since we haven’t seen space warfare of the type we see in science fiction, and the results are very dependent on technological assumptions.  But let me turn that question sideways: what are the salient features of naval warfare, and do these match up?

FP: So it sounds like sci-fi space warfare is transplanted naval warfare, but a very mixed bag when it comes to realism?

CW: It is kind of a mixed bag, but “realistic” is a word that I have problems with. For a lot of these models, the assumption drives the conclusion. The ability of your laser cannon drives a lot of the problem. If you have a faster-than-light propulsion or communications capability, that also drives the problem. If you do a fairly simple extrapolation of current technology, what you end up with is space combat as sort of ponderous ballet with shots fired at long distance at fairly fragile targets where you have to predict where the target is going to be. You don’t end up with space fighters. You don’t end up with lots of armaments.”

Welcome to the Python Cave! A deep, dark place where pythons feed on bats. Secrets are not the only thing hidden within — the Marburg virus. Connor Bamford explains.

“This cave has already lead to the death of one Dutch tourist and the infection of one from the US sparking major scientific interest in it. This story is nicely written up in the recent book: Spillover by David Quammen. But up until a couple of years ago we didn’t know how these people got the virus and that’s why the Centers for Disease Control, alongside teams from South Africa and Uganda itself have made it their mission to uncover the secrets of Python Cave and specifically, why did those tourists get infected at that particular place and time? If we know that, maybe we can rationally defend ourselves against getting infected. Well,  a recent paper appears to answer that question.”

So there you have it… a pick of some of the more interesting science articles and blogs around the interwebspace. Join us next week, same bat-time, same bat-channel.