It seems it came time to say goodbye to gasoline. As it is known, the petroleum resources are running out and very soon we will stay without them. Also, it pollutes air and it causes a great risk to human’s health. And finally, there is a money concerns. People are no longer willing to pay high prices that oil companies are charging for it. And why should they, if there are a lot of different alternative sources of energy. Automotive industry knows all of this and it is investing a lot of time and money to find and develop the fuel of the future.

The search is on, but what will the fuel of the future be? Believe or not, the answer is simple. An air! It’s all around us. It’s free. And most importantly, it is not polluting. Sounds unbelievable, we know. But, it is not that simple as it appears.

­­Unluckily, air alone cannot be used as a fuel. First of all, energy has to be stored in it by squeezing the air using a mechanical air compressor. Once the compressed air is released, it expands. The expanding air can be used to drive the pistons that power an engine.

Amazingly, the idea of using compressed air to power a vehicle is not new. Early prototypes of an air-powered vehicle were constructed before the invention of the internal combustion engine. 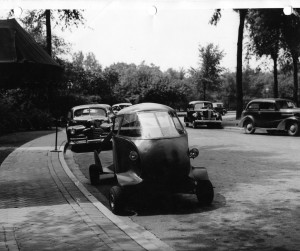 How Compressed Air Can be Used as a Fuel?

­By the laws of physics, uncontained gases will fill any given space. On the other hand, compressing a gas into a small space is a way to store energy. When the gas expands again, that energy is released to do work. That’s the basic principle which governs an air car.

It is expected that the first air cars will have air compressors built into them. After a drive, you’ll be able to take the car home, put it into the garage and plug in the compressor. The compressor will use air from around the car to refill the compressed air tank. Unfortunately, this is a rather slow method of refueling. It will probably take up to two hours for a complete refill. If this idea catches on, air refueling stations will become available at ordinary gas stations. Filling your tank at the pump should probably take about 3 minutes.

How Compressed Air Car Can be Caracterised Nowadays?

Today’s compassed air cars are far from perfect. As anything else, this technology has its advantages and disadvantages. Here are the main pluses and minuses of this technology.

1. It uses no gasoline or other bio-carbon based fuel.

2. Refueling could be done at home using an air compressor or at service stations. The energy required for compressing air is produced at large centralized plants.

3. Compressed air engines reduce the cost of vehicle production, because there is no need to build a cooling system, spark plugs, starter motor, or mufflers.

4. The rate of self-discharge is very low opposed to batteries that deplete their charge slowly over time. Therefore, the vehicle may be left unused for longer periods of time than electric cars.

5. Expansion of the compressed air lowers its temperature; this may be exploited for use as air conditioning.

6. Reduction or elimination of hazardous chemicals such as gasoline or battery acids/metals

7. Some mechanical configurations may allow energy recovery during braking by compressing and storing air.

1. The principal disadvantage is the indirect use of energy. Energy is used to compress air, which – in turn – provides the energy to run the motor. Any conversion of energy between forms results in loss.

2. When air is compressed to fill the tank, its temperature increases up. If the stored air is not cooled while the tank is being filled, then when the air cools off later, its pressure decreases and the available energy decreases.

3. Refueling the compressed air container using a home or low-end conventional air compressor may take as long as 4 hours, though specialized equipment at service stations may fill the tanks in only 3 minutes.

4. The overall efficiency of a vehicle using compressed air energy storage, using the above refueling figures, is around 5-7%. For comparison, well to wheel efficiency of a conventional internal-combustion drivetrain is about 14%.

Despite these drawbacks, big car companies are still exploring the use of compressed air in a hybrid drivetrain setup. Compressed air vehicles are also remarkably quiet and, discounting the air compressors themselves, produce absolutely no emissions. They’re also very, very cheap to operate. This could make them ideal city service vehicles. Until then, compressed air cars have a long, long way to go.