A recent discovery by a research team at Penn State University and the Carnegie Institution of Washington reminded us of the amazing, but still unrealized idea of constructing space elevators. A team of researchers discovered a new material and they say it may be used for anything – even for a space elevator.

John Badding, professor of Chemistry at Penn State University and Thomas Fitzgibbons, his student, announced they have discovered a way of making extra thick and strong diamond nanothreads. This material is stronger, thinner and stiffer than any other known fibers, including nanotubes and polymers. 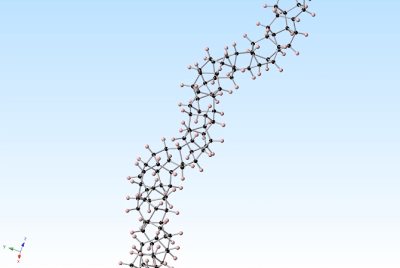 Professor Badding and Fitzgibbons used a specialized device which compressed benzene up to 200,000 atmospheres. This caused benzene to polymerize into carbon atoms which are arranged to form the fundamental unit of a diamond’s structure. The atoms are linked in all three dimensions and linked again to four carbon atoms, forming a tetrahedron.

This is an incredible discovery, given almost a century of failed attempts to create such a strong nanomaterial. Previous carbon nanotubes were too weak and they wouldn’t have been able to make a reliable elevator ribbon (cable). These diamond nanothreads are more than 20,000 times thinner than a human hair, but just a few centimeters long. So, the next step for researchers is to create nanothreads that will be longer and more practical.

The development of the idea

Who is the first person that created the concept of space elevators? Yuri N. Artsutanov, Russian engineer, is best known as one of the pioneers of the space elevator idea. He first discussed it in 1960 in his article “To the Cosmos by Electric train”[1] . However, he was inspired by the astronautic theory pioneer and Soviet rocket scientist, Konstantin Tsiolkovsky. His idea of building an orbital tower dates from 1895, and he is considered to be the first person who conceived the idea.

Three decades after the Artsutanov’s article, Sumio Iijima discovered a revolutionary material – a carbon nanotube. Several years after his discovery, NASA acknowledged the importance of this material in making an orbital skyhook possible and investigated the concept. The first conference on the matter was held in 2002, in Seattle, Washington. In 2003, an extremely important book was published – “The Space Elevator-A revolutionary Earth-to-space transportation system”. It describes almost every aspect of a space elevator’s function and design.

Some science fiction writers were especially important in the development of the space elevator idea. The credit for the most famous work which popularized the idea goes to “The Fountains of Paradise”, written by Arthur C. Clarke. Consulting with researcher Jerome Pearson, he described the construction of an “orbital tower” in detail. The novel has inspired writers and scientists all over the world, Isaac Asimov being one of them. William Forstchen’s “Pillar to the Sky” is the latest science fiction novel about the subject, and the first one that was written with the help of NASA experts.

So, let’s see what a space elevator would look like, plain and simple. It would feature a robotic car that travels up a cable made of super strong carbon nanotubes. The car would be powered by a magnetic motor and it is estimated it would carry 30 people at once. Simply speaking, the elevator would be slingshot around the Earth with the help of astronomical centrifuge.

Just think of the game tetherball. In this case, the rope is a ribbon (carbon nanotube cable), the pole is the Earth, and the ball is represented by a counterweight. If we make the ball spin around the pole really fast, this keeps the rope taut. The counterweight would keep the cable straight and allow the cars to ride up and down the cable.

LiftPort’s design proposed that elevators should be 62,000 miles (100,000 km) high, while the ribbon would be just a few inches wide. Making the cable strong enough was the biggest challenge in space elevator construction – until today. Right now, the biggest problem is making a cable long enough. Yoji Ishikawa, a research and development manager at Obayashi is very optimistic, believing this could be solved in the next two decades.

Steps toward the realization

Many scientists and writers have been playing with the idea, but where do we stand now? According to Obayashi Corp., a Japanese construction firm, we will have operational space elevators by the year of 2050  (source).

They claim that the journey could last up to seven days (from the Earth to the space station, and vice versa) and it would be a 59,651 mile trip. In an interview with ABC News [2], Yoji Ishikawa gives his opinion on carbon nanotechnology and the feasibility of this huge project. Ishikawa says: “The tensile strength is almost a hundred times stronger than steel cable so it’s possible. Right now we can’t make the cable long enough. We can only make 3-centimetre-long nanotubes but we need much more… we think by 2030 we’ll be able to do it.” However, he expresses doubts, claiming that no single corporation can handle this project and international cooperation is needed.

Obayashi Corp. is not the only company that wants to take credit for constructing the first space elevator. Japanese universities, with Kanagawa University as one of them, are trying to work out the various mechanisms needed to “ascend at differing altitudes and the best brake system”. Other companies are planning to build space elevators as well. Michael Laine, president of the LiftPort Group, founded his own Kickstarter campaign and raised funds for lunar elevator research.

The benefits of building space elevators

The first thing most people think of when you mention the idea is the development of space tourism. Hordes of space enthusiast will be probably waiting in line just to take a ride in a space elevator. We could experience a real boom in the tourism industry as a trip into space will be much easier and cheaper to accomplish. Just compare the prices – a kilogram of cargo transported by space shuttle costs about $22,000, while transporting the same cargo via elevator would cost around $200 per kilogram.

Space travel will become easy and comfortable, as there would be no acoustic vibration and intense gravity loads. Also, the cost of launching rockets and small satellites will be dramatically reduced due to the fact they won’t need rocket fuel. At first, rockets and satellites will be transported to space stations and then they will be launched from there.

Up there, we could harvest the inexhaustible resources that space offers us. Just imagine numerous solar panels hooked up, sending all the precious energy back to Earth. The possibilities are limitless. Now, it’s just a matter of speed and tenacity of engineers and political will to make space elevators work as soon as possible. Will we ever live to see the greatest invention of the 21th century and take an affordable ride into space? The years ahead will tell us – we just have to be patient.

[2] Matthew Carney, Japanese construction giant Obayashi announces plans to have a space elevator up and running by 2050, ABC news, 2014