In the last few weeks in Australian politics there have been critical discussions regarding the inclusion of science in NAPLAN (the National Assessment Program in Literacy and Numeracy).  Without entering too much into the debate regarding the reported advantages or disadvantages of NAPLAN, it is heartening to hear that science is at the forefront of political agenda.

NAPLAN is a series of standardised testing given to all Australian students in Grades 3, 5, 7 and 9. Beginning in 2008, these pencil/pen and paper tests assess children in set skills relating to reading, language conventions, writing and numeracy. ACARA, Australian Curriculum Assessment and Reporting Authority, claim that “NAPLAN tests identify whether all students have the literacy and numeracy skills that provide the critical foundation for their learning, and for their productive and rewarding participation in the community”. (*) Students are benchmarked against identified national minimum standards and then ranked in order of achievement.

The value of NAPLAN results is undoubtedly contentious in education circles. Many would argue the authenticity of the assessment claiming the format excludes many learners from highlighting their understandings for starters. However for parents, they do provide one view of where their child ‘sits’ against the nation. The issue of NAPLAN is complicated further as individual school results are published on the MySchool website. This site provides comparative NAPLAN data of schools with similar socio-economic levels.  Whilst not under-estimating the debate of NAPLAN, the data from it does matter. Typically, schools want to improve their data irrespective of how it ‘looks’. Schools develop programmes and provide additional assistance for those students who fail to meet national minimum standards. 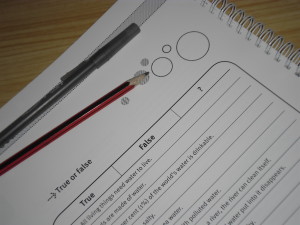 The proposal to include science in the NAPLAN testing is also controversial. The Federal Minister for Education Mr Garrett claims that we should track our student’s progress in science and that science could be included in NAPLAN from 2015. He highlighted the growing gender gap in sciences and the drop-out rate in high schools. Not many teachers would argue with this point and this issue is an area I have previously commented on.

What will be interesting to see is what these science tests will look like. Science is very much an inquiry–based skill and effective teaching of science is hands-on. Scientific literacy includes both knowledge of scientific concepts and how science works. The how of science is through performing experiments, collecting and analysing data and then communicating understandings. I am unsure how exactly this area will fit with a pencil/pen and paper test.  However, through the inclusion of science in the national testing programme, science will be tacitly given the exact same priority as literacy and numeracy. The teaching of science will be viewed as a serious area of learning not relegated to the back-benches of fill-in afternoon sessions. Science will become high on every school’s agenda. Schools will want to meet minimum standards and become serious in how science is taught.

The school theme of Australia’s National Science Week for 2013 is “A Century of Australian Science”, a week to celebrate the last 100 years of Australian scientific endeavour. How many schools plan events for National Science Week? Will this change if indeed science is included in NAPLAN? The scientists who will meet the challenges of the next 100 years will be sitting in today’s and tomorrow’s classrooms.  Whether the inclusion of science in NAPLAN will aid in nurturing our future scientists remains to be proven. I still believe what will help them though, is to provide rich inquiry-based science.  You can only provide this type of science however, if science is given the priority it seriously deserves.

2 thoughts on “Seriously, NAPLAN to include Science?”