For many of us, trying to hide our double chin – perhaps under a scarf or turtleneck – is a daily battle. It’s a major cause of embarrassment for thousands of affected Australians, and is usually caused by obesity or other natural effects of aging. A double chin is actually just an extra layer of submental fat that forms around the neck and can sometimes sag, creating the impression of a second chin. Up until now, surgery was the only way to remove it.

However, there is now a surgery-free way to remove the dreaded double chin thanks to a recently FDA-approved drug called Kybella (or deoxycholic acid). Approved as a treatment for adults with moderate-to-severe submental fat below the chin, Kybella is an injectable drug that works by helping the body absorb fatty tissue. In essence, the drug dissolves the submental fat under the chin by destroying the fat cell’s membrane, causing it to burst. The remains of the cell are then reabsorbed by the body’s normal metabolic pathways.

According to the results of numerous clinical trials, injecting Kybella into the affected area can produce a noticeable reduction in submental fat in just 6 months. Patients can receive up to 50 injections in a single treatment (which usually lasts around 5 minutes), and sessions must be spaced at least 1 month apart for best results. No bandages are required, and recovery time is between 2 and 3 days. 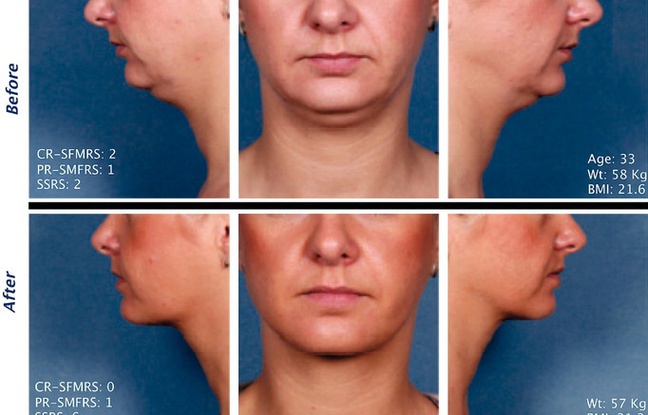 There are some side-effects, however, that patients need to be made aware of before embarking on this journey. The most common side-effects reported in clinical trials were swelling, bruising, pain, numbness, redness and areas of hardness around the treatment area. However, most of these should disappear within a few days after treatment.

It’s important to understand that Kybella can also cause far more serious side-effects, such as possible nerve damage in the jaw. Although these side-effects are much less common, some patients have reported uneven smiles, weak facial muscles, and even trouble swallowing after receiving treatment. Indeed, according to Amy G. Egan of the FDA’s Center for Drug Evaluation and Research, “Treatment with Kybella should only be provided by a licensed health care professional, and patients should fully understand the risks associated with use of the drug before considering treatment.”

The estimated cost per treatment is expected to be around $500 per session. The exact pricing details are being withheld until the product’s release in June 2015.

Using Kybella to get rid of that unwanted double chin may not suit everyone. In cases where patients have excess skin, a better alternative may be chin augmentation, or possibly a minor facelift to tighten up the area under the chin and bring it into proper alignment with the rest of the face. Chin augmentation can also sharpen the neck angle, help eradicate sagging jowls, and generally streamline the entire chin and neck area to bring the face into proportion. The most common non-surgical treatment in chin augmentation are filler injections – still the leading procedure due to its quick and simple steps of enhancing one’s appearance.

As is always the case in any health matter, it is best to speak to your GP or health care professional about your concerns and to seek their advice before taking any action.

Kybella is set for release in June 2015.