By now, I think it’s safe to say that if you’re reading this, it means the world didn’t end on Friday. Which is rather a good thing, because a lot of interesting things have been happening recently! Even though I’ve been busy as can be, writing papers and trying to finish off a thesis there have still been a few fascinating little gems to catch my eye in the news this week…

Firstly, NASA have announced a new prototype space suit, with new and improved technology. Intended to be easier to put on, amongst other things, the most exciting part of the news is that these new suits are intended for deep space missions, focussing on safety “during spacewalks and potential surface activities”! Oh, but there’s just one thing which everyone’s noticed… 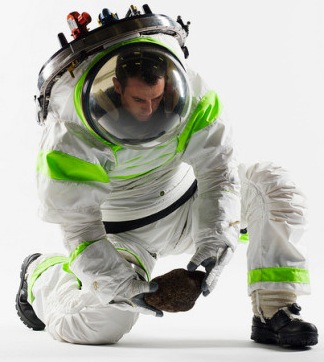 Nasa said one of the key differences was that the new suit has a one-piece design, into which the wearer crawls in through a hole in the back, as opposed to the trousers-top-helmet version currently in use on the International Space Station.

Meanwhile, in Switzerland, physicists have been puzzled by the results they’ve seen from the LHC. While there’s now little doubt that they’ve detected a signature which matches what they’d expect from “a Higgs-like boson”, it seems like there’s more going on than they realised…

Yesterday researchers at the Atlas experiment finally updated the two-photon results. What they seem to have found is bizarre—so bizarre, in fact, that physicists assume something must be wrong with it. Instead of one clean peak in the data, they have found two.

Finally, one star near to Earth which has always garnered much attention from science fiction writers is Tau Ceti – right in our neighbourhood at a mere 12 light years away. For a long time, many have speculated on the potential for life-sustaining worlds around the Sun’s slightly more orange neighbour, and now it looks like there may well be. While we’re still waiting for confirmation, there may be 5 planets around Tau Ceti, and two of those might be candidates for sustaining life!

Nearby Tau Ceti may host two planets suited to life

The highlight of this alien solar system is Tau Ceti e, which has a mass of over four Earths and a year just under half as long as ours. It orbits in the star’s habitable zone, the region where liquid water is thought to exist. “It is in the right place to be interesting,” says [Hugh] Jones.

Short but sweet, that’s all for this week. I hope everyone has a lovely Christmas (or whichever of this season’s holidays and festivals you choose to celebrate). See you next time!