It’s been rather a turbulent week, all told. There’s been a lot going on in the news, both good and bad. Hopefully, this little handful of science news items will help you finish the last week and begin this next one on a lighthearted note!

NASA’s Kepler mission has found a star system which has not one, but two possibly terrestrial planets in its habitable zone.

Whether either or both of Kepler-62’s optimally positioned planets actually has water is beyond the technical capabilities of the Kepler and other telescopes. Kepler works by detecting the very slight dips in light coming from a star caused by a planet passing by, relative to the telescope’s line of sight.

Sometimes the best way to learn more about nature is to try and recreate it. That happens to be exactly what happened when a group of roboticists were looking at insects…

Roboticists discover the secret of insect flight, and it’s not wings

They found that the moth moved its abdomen in direct response to its shifting visual environment. “If the pattern is rotating up (clockwise), the moth would raise its abdomen up (counterclockwise),” says study co-author Jonathan Dyhr, a University of Washington biologist. “The moth was raising or lowering its abdomen to counteract the movement.” 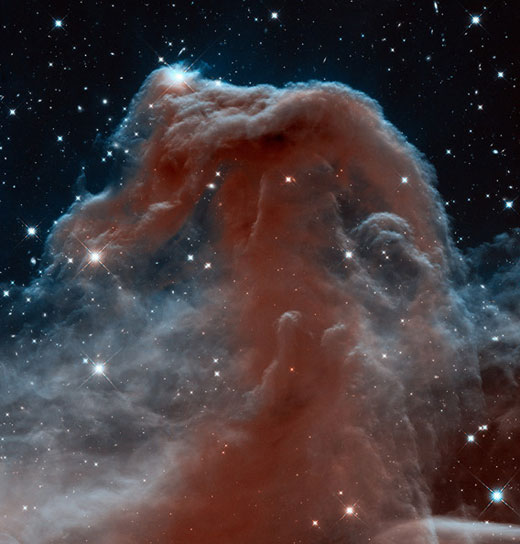 To celebrate the 23rd anniversary of the Hubble Space Telescope’s launch into orbit, NASA have released a brand new and frankly beautiful image of the iconic Horsehead Nebula. Phil Plait explains more…

The Horsehead itself is the site of ongoing star formation. The dense gas and dust inside the nebula is collapsing to form stars, and, at the same time, the edges are being eroded away by the fierce ultraviolet light of Sigma Orionis. The top of the Horsehead is acting a bit like a shield, protecting the material beneath it, which is why it’s taken on that umbrella-like shape. You can see more sculpted pillars of material around the sides, too, like sandbars in a stream.

Ants are fascinating little creatures, and a team of Swiss researchers have been studying the goings on inside a colony of them – by tracking them with barcodes!

Barcodes let scientists track every ant in a colony

Finally, everyone’s favourite astronaut, Commander Chris Hadfield aboard the ISS answers an interesting question. What happens if you wring out a wet cloth in zero gravity? Click the link to watch the video!

What happens when you wring out a washcloth in space?

Two Nova Scotia high school students, Kendra Lemke and Meredith Faulkner, submitted this experiment to Canadian Space Agency and got to see astronaut Chris Hadfield actually test it out on the ISS. The results are seriously extraordinary and you need to see them.