With the exponential growth of scientific research, there were a plethora of articles which could have been reported this week. A few that caught my attention are listed below.

A Future of Genetically Superior Humans

On Wednesday it was reported that geneticists have moved into an area of research previously believed to be highly unethical. Researchers at the Oregon Health and Science University took steps to prevent women from giving birth to children with genetic diseases. “That kind of genetic engineering has been ruled off-limits,” says Marcy Darnovsky of the Centre for Genetics and Society. As the Dartmouth bioethicist Ronald Green mentions, this kind of research could lead to generations of genetically superior humans. A concerning concept, I’m left with visions of the novel Brave New World by Aldous Huxley warning of such actions. http://www.npr.org/blogs/health/2012/10/24/163509093/geneticists-breach-ethical-taboo-by-changing-genes-across-generations

The Dangers of Pumpkin Carving

In light of Halloween this Wednesday
, this article caught my attention as families throughout Canada and the USA begin carving pumpkins in preparation for this spooky holiday. “Even with optimal treatment, injuries from pumpkin carving accidents may leave people with compromised hand function,” says scientists from SUNY Upstate Medical University. Due to these risks, many companies do market tools specifically designed for pumpkin carving. Perhaps they are worth the investment? http://blogs.smithsonianmag.com/science/2012/10/scientists-use-cadaver-hands-to-study-the-dangers-of-pumpkin-carving/ 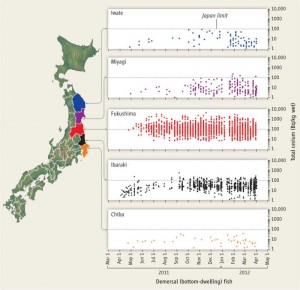 Plots of radioactivity in fish near Fukushima Daiichi nuclear plant were created by Ken Buesseler of the Woods Hole Oceanographic Institution in Massachusetts.”There is enough radioactivity in the fish in Fukushima prefecture to seriously hinder commercial fishing,”-approaching two years after the disaster, Japan is still being affected. http://blogs.nature.com/news/2012/10/fukushima-fish-still-hot.html