What exactly is a liquid? It’s a seemingly basic question with an answer which may seem obvious to any of us. But as with so many things in science, it may not be as straightforward as you think. Of course you know what a liquid is, and the answer which may have come to mind as you read this paragraph is most certainly the truth – but it may not be all of it.

This curious looking setup is the pitch drop experiment. Some people reading this will undoubtedly know of it. Set up at the University of Queensland in 1927 by Professor Thomas Parnell, this experiment may take a few of your ideas about what a liquid actually is and turn them on their heads. 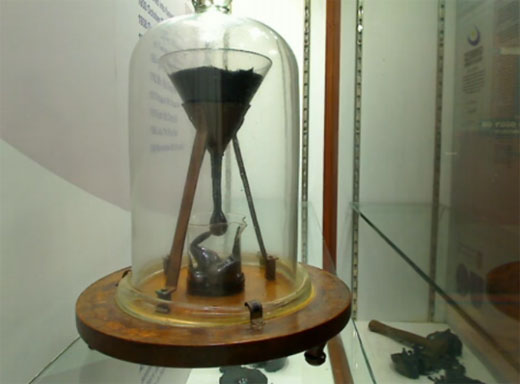 Pitch, you see, is a liquid. But if you were to see some of it up close, you might not think so. To our eyes and senses, it appears to be a solid. It’s a black, waxy looking substance, a derivative of tar which ship builders used to use to waterproof boats. You can think of it more or less like a liquid which moves in slow motion. Extremely slow motion! Pitch is so viscous and flows so slowly that you can quite easily pick up a piece of it and hold it in your hands. You can snap pieces of it off, and if you hit it with a hammer, it will even shatter. But make no mistake – pitch is not a solid.

Perhaps a better word to use here is not liquid, but “fluid.” A fluid is, simply, any substance which is able to flow. Everyday liquids like water are fluids, as are gasses like the air around us. So too are the thicker, more viscous liquids you may encounter, like treacle or tomato ketchup. But pitch is quite possibly the most viscous fluid in the whole world, an average 100 billion times as viscous as water.

Parnell’s pitch drop experiment, presently looked after by Professor John Mainstone, was set up to demonstrate this bizarre fact. In 1927, Parnell heated a sample of pitch and poured it into a sealed glass funnel. He gave the black tarry fluid three full years to “settle” before cutting open the stem of the funnel and leaving it to its own devices, kept in relatively inert conditions under a large glass bell jar. I say relatively inert. This experiment is really more of a demonstration, and how fast the pitch flows depends on the seasons – it moves ever so slightly faster in warm weather, though still never so fast as to be actually noticeable. In the 83 years since, this slow moving tarball is currently forming it’s ninth drop.

In material science terms, pitch is a “viscoelastic polymer”. You may be familiar with some other, similar liquids without realising it. There are, you see, a few materials which very slowly flow over time. The effect is so slow that it takes a significant fraction of your lifespan to notice any motion, but it is there. Certain types of varnish actually have similar, very slowly flowing properties, which can be a concern in the art world. Paintings are often handed down through generations, and anyone wishing to preserve them must be careful not to use varnishes which may slowly flow and spoil the artwork.

On the other hand, there’s a common misconception that glass flows this way. This is absolutely not true. Glass, you see, is not viscoelastic. It’s what’s termed, an “amorphous solid”. Amorphous materials have no order at the atomic level. Many plastics, like the type which makes up the bottles you may buy drinks in, are amorphous this way. If you were to look at a piece of glass on a very, very small scale, you’d find that it’s made up of a web of molecular chains, made from silicon and oxygen atoms. But amorphous solids are not fluid. You can leave a piece of glass alone for centuries, and it will not flow at all.

Actually, glass is quite a generic term, referring to a whole variety of materials. Any material which is rigid and brittle, with a disordered structure, is technically a glass. As well as the glass in windows, many types of plastic, such as polycarbonate and perspex, are technically glasses. Even metals can be made into a glass. If you shave, the razorblade you use is probably made from a glassy metal. Glasses can be pulled and stretched (this is one way in which fibre optics are made), but if you leave them alone, they’ll remain perfectly solid.

Viscoelastic polymers are not like glass. They may have a disordered structure, like a glass, but they behave rather differently, even though you may not realise this at first glance. The word viscoelastic itself, gives away what’s really going on. These materials are both viscous, and elastic. Being elastic, you can stretch them, and they will try to return to their original shape. Leave them alone, and they’ll behave like viscous liquids, and slowly flow. This is because unlike glasses, the molecular chains which make them up aren’t tightly interconnected. Instead, they’re a tangled mess, looking, if I’m honest, not unlike my hair does when I wake up some mornings. Because those chains aren’t joined together, they can slowly slip past each other, which is what gives these materials their fluid properties. Anyone who’s used gloss paint may have noticed how a surface which appears to be smooth will sometimes have visible drops running down it hours later, where the paint flowed before it had time to dry. Unlike pitch, however, most types of paint do eventually dry and harden. Viscoelastic materials, like amorphous materials, are also defined by how they behave at the molecular level – any material can only move  as fast as its molecules allow. If you take a highly viscous fluid like pitch and try to move it too quickly, the molecular chains which make it up won’t be able to move fast enough, and it will simply snap. It’s only if you leave it alone for long enough, that you can see it’s fluid behaviour.

This is precisely what Parnell did with the pitch drop experiment all those years ago. To date, it’s already managed to prove his point. The pitch in that funnel, kept at Queensland University, is very definitely flowing just like a liquid. It’s just an excruciatingly slow liquid.

To date, no one has been around to actually witness a drop falling. I’ve no doubt, this must be very frustrating for people like John Mainstone (who actually missed one drop in 1988 because he’d just stepped out to get some coffee). So far, the pitch has dropped just over once a decade.If you’re feeling lucky, you can watch a live webcam feed at the Queensland University website, where three webcams now monitor it at all times. Though I should warn you that it’s possibly even less exciting than watching paint dry. Some are beginning to say that the ninth drop may fall soon. But then, they’ve already been saying that for years… 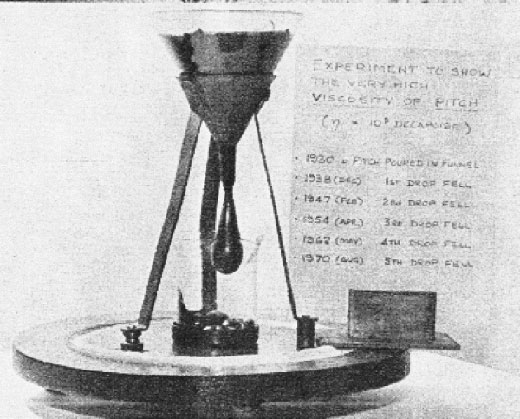