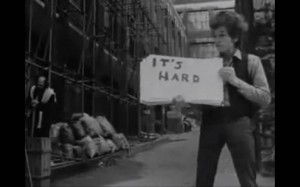 Bob Dylan and the curse of self-plagiarism. Disclaimer: this weeks theme largely relates to Bob Dylan. Up first — here comes a story of a Hurricane!

With frankenstorm Sandy in the news, Empirical Zeal asks the question “What is the true measure of a storm?”

“In the western hemisphere, hurricanes are all rated on the Saffir-Simpson scale, an empirical measure of storm intensity devised in 1971 by civil-engineer Herbert Saffir and meteorologist Bob Simpson. To compute a storm’s category rating, you have to measure the highest speed sustained by a gust of wind for an entire minute. The wind’s speed is measured at a height of 10 meters  because wind speeds increase as you climb higher, and it is here that they do the most damage. Based on how large this maximum speed is, a storm is assigned to one of five different categories.”

Being halloween this week, there were numerous posts on the intersection of science and horror — generally, relating to zombies and the prophesied zombie apocalypse. But by far my favourite finding this week was the Science Chamber of Horrors — presenting the freakiest and most terrifying aspects of science, scientists, and nature. Observe…

“Ffirth made numerous attempts to inoculate himself by depositing fresh black vomit and blood obtained from patients in the early stages of the disease into incisions made in his arms and legs. Besides numerous other experiments he inserted four drops of such serum into an incision in his leg. One must read this interesting treatise in order to appreciate fully the determination of the investigator, who administered black vomit to animals, injected it into his own circulation, and deposited it in his own tissues. He inhaled the fumes of six ounces of this material which he heated over a sand-bath in a small room; the residue he made into pills and swallowed. Failing in this, he further tried to inoculate himself with blood serum, saliva, perspiration, bile, and urine, and finally concluded that yellow fever was neither infectious nor contagious.

I took half an ounce of the black vomit immediately after it was ejected from a patient, and diluting it with an ounce and a half of water, swallowed it; the taste was very slightly acid; as I felt no mental anxiety or uneasiness, I could attend particularly to my sensations. It neither produced nausea or pain; my pulse, which was beating seventy-six in a minute, moderately strong and full, was not altered either in force or frequency: In fine, no more effect was produced than if I had taken water alone.”

The magazine formerly known as Miller-McCune, now Pacific Standard, has a story on how the science of recall is finally helping us to learn other languages.

And finally, according to Wikipedia “Joni Mitchell described Dylan as a “plagiarist” and his voice as “fake” in a 2010 interview in the Los Angeles Times, in response to a suggestion that she and Dylan were similar since they had both changed their birthnames. Mitchell’s comment led to discussions of Dylan’s use of other people’s material, both supporting and criticizing Dylan.”

I only mention this so as to bring us full circle to Jonah Lehrer — recently disgraced writer. Carl Zimmer’s blog post sets out the situation quite nicely.

“In June, a writer named Jonah Lehrer got busted for recycling material on a blog at the New Yorker. Lehrer, who specialized in writing about the brain, had been writing a blog called The Frontal Cortex for six years at that point; having just been appointed a staff writer at the New Yorker, he moved it to their web site, where he promptly cut and pasted material from old posts, as well as from magazine and newspaper pieces.”

Carl Zimmer is quoted and interviewed for a long New York mag piece. It seems Lehrer’s gravest charge is not only self-plagiarisation, but also attributing quotes to Dylan that he simply invented or distorted.

“A month ago, when Lehrer’s self-plagiarism scandal emerged, some supporters argued that it was simply the misstep of a young journalist. But making up sources, deceiving a fellow journalist, and offering accounts of films you have never seen and emails never exchanged, is, to crib Bob Dylan, on a whole other level.”

Out of the whole debacle is the realisation that not many people like to admit to or be up front about. That science is complicated. It’s hard. And those of us that try and communicate it should find some way of glorifying such complexity rather than presenting the perfectly solved Rubik’s cube. Over to you Carl…

“I put it to Kachka in a similar way, referring to writers like Lehrer: “They find some research that seems to tell a compelling story and want to make that the lesson. But the fact is that science is usually a big old mess.””

And that, dear readers, is the moral of the story. Until next time…