It was a late February night in 1987 when, standing on top of a Chilean mountain range, Ian Shelton saw something which no one had seen for centuries. Looking up in disbelief, he watched a star explode some 160 thousand light years away. Rushing to another observatory to check with someone else, he was initially met with stark disbelief. But there was no doubt. Shelton had seen a supernova explosion with his own eyes.

Named SN 1987A, this was the death of a massive star in the Tarantula nebula. Distant enough to not even be in our own galaxy, but in the Large Magellanic Cloud – one of the Milky Way’s smaller satellite galaxies, the discovery was reported independently by Albert Jones in New Zealand. This began decades of fascinating observations for astronomers, as many began to watch this supernova expand over the years, in real time.

Supernova which are close enough to see with the naked eye are rare beasts. This was, and still is, the only one close enough and visible enough to see properly with modern telescopes, giving us some of the best information we’ve ever had about how an exploding supernova interacts with the dusty interstellar clouds which surround it.

The latest observations of this literally awesome event come courtesy of a team of astronomers working in Australia and Hong Kong, led by Giovanna Zanardo at the International Centre for Radio Astronomy Research (ICRAR). Using CSIRO’s Australia Telescope Compact Array in New South Wales, the researchers have published the highest resolution images of the stellar explosion’s aftermath ever taken.

Portrait of a Dying Star 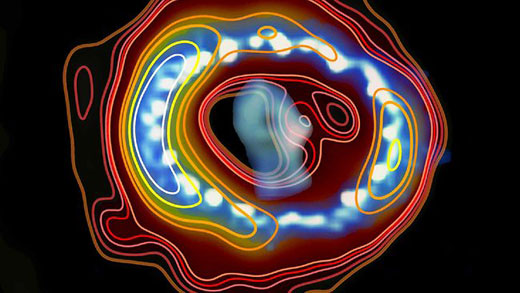 High resolution images are wonderful in astronomy. The higher the resolution, the more you can learn about what you’re seeing. Zanardo and her colleages compared their observations with other images and data taken at optical and x-ray wavelengths. On doing so, they gained some fresh insight into exactly what happens shortly after a star explodes.

In the centre of the explosion, stellar ground zero, they discovered a pulsar wind nebula. This is a pocket of intensely hot material emitted by a neutron star*, the last remains of the exploding star’s core, proving that SN 1987A did not create a black hole.

Referred to in technical jargon as a “compact source”, a neutron star is a tiny ball of incredibly dense material. With a mass up to over 3 times the mass of the Sun, these bizarre little objects truly are compact. An average neutron star has a radius of just 12 km, which is comparable with the size of Sydney. Yes, you read that correctly. The mass of a star compressed into something with a size similar to a large city.

This discovery actually answers a long standing puzzle about SN 1987 A. Supernovae like SN 1987A are normally expected to form neutron stars, because of the near-unimaginable pressures which occur inside an exploding star. But for several years, despite looking carefully, no astronomers could find any trace of a neutron star amid the stellar debris. But the star which caused this supernova would not have been massive enough to collapse into a black hole, leading theoreticians to try and devise explanations for why there was no neutron star to be seen.

If Zanardo’s team are right, and they have indeed found a pulsar wind nebula inside the shattered remnants of this dead star, then it has to be generated by something. Unless I’m mistaken, this may be some of the most convincing evidence yet for the missing neutron star!

Discovering all of this, however, was far from easy. Radio images at centimetre wavelengths are difficult to capture with detail. Exceptionally good weather conditions are needed. Zanardo explains, “For this telescope, these [observations] are usually only possible during cooler winter conditions, but even then the humidity and low elevation of the site makes things very challenging.”

Radio telescopes effectively “see” in radio waves which the rest of us are more familiar with as the way in which wifi and mobile phones transmit data (though the radio waves seen here are at much shorter wavelengths than your phone uses). Because Earth’s atmosphere is mostly transparent to radio waves, this means that radio telescopes work perfectly well during daylight hours. However, differences in atmospheric density due to temperature and weather conditions can still distort radio telescope images by refracting the radio waves used to create them.

Supernovae emit radiation across the whole electromagnetic spectrum. The expanding cloud of supernova material, which is technically still exploding over two decades after the original star’s demise, is so hot that it emits infrared, visible light, ultraviolet, and even x-rays. Meanwhile at the lower end of the spectrum, powerful magnetic fields guide electrons on specific paths. As those electrons spiral along the magnetic field lines surrounding the supernova, they emit radio waves – the same radio waves which Zanardo and her team used to capture their images.

With it’s atmospheric and geographic stability, Australia is an excellent place to host radio telescope arrays, which is why part of the Square Kilometre Array is being built in Murchison in the Western Australian Outback. Zanardo’s work only goes to exemplify this. She plans to take further observations of SN 1987A to take a close look and try and find more details on what might be going on in the midst of it. 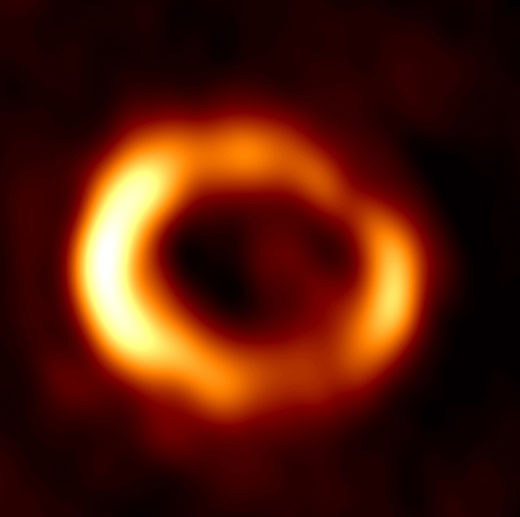 * A pulsar refers to a specific type of neutron star which rotates incredibly rapidly, sending out pulses of radio waves as it does so – much like a cosmic lighthouse.

Image credits:
Top – A composite image of SN 1987A at different wavelenths. Green shows optical light from the Hubble Space Telescope, blue shows x-rays recorded by the Chandra X-ray Observatory, and red are Giovanna Zanardo’s observations of 7 mm radio waves. – ICRAR/NASA Hubble/NASA Chandra
Middle – The same Hubble Space Telescope image, with the radio observations overlaid as contour lines. Astronomers often use contour maps to get a clearer view of what their images contain. – ICRAR/NASA Hubble
Bottom – An image created only with the radio emission recorded, showing a ring of hot ionised material. – ICRAR

1 thought on “A Supernova Post-Mortem in Radio Waves”