I was awake at stupid o’clock last Sunday morning to watch NASA’s livestream of the launch of the HTV-4 resupply vehicle. At precisely 05:48:46AM AEST, JAXA H-IIB F4 launch vehicle lifted off smoothly en route to resupply the International Space Station (ISS). The 5.4 tonne payload comprised all the usual suspects: water, replacement and upgraded electronics for various ISS systems, spares for major station components, and new equipment and supplies for experiments.

Nestled in amongst the other cargo were four tiny ‘CubeSats’, two of which were funded by a Kickstarter project: ArduSat. These tiny satellites are the first example of crowdfunded space operations, and represent an exciting new development in the recent popularisation of ‘citizen science’.

Commercial satellite launches are immensely expensive, costing hundreds of millions of dollars using current rocket-based technology. The idea behind the ArduSat project is to provide low-cost access to real, orbiting satellites to students and space enthusiasts. By designing payloads small enough to fit into gaps in the main cargo area, innovative satellite operators are able to hitch a ride on commercial space launches at a fraction of the cost. The dramatic cost reduction has finally made it viable to create an orbiting educational platform, a remarkable achievement.

The two crowd-funded cubesats, ArduSat-1 and ArduSat-X, really are tiny—just 10 x 10 x 10cm and weighing only 1kg each. But their size is deceptive. Each satellite not only has its own flight stabilisation systems, but also incorporates a camera, an impressive suite of sensors (see list below), and 16 fully-functional Arduino-based computers. Each of those computing modules is capable of running experiments either independently or in concert with multiple other modules. The ‘experiments’ that can be run are essentially computer programs which can access data from the onboard sensors.

It is the onboard Arduino computers from which the ArduSats take their name. Arduino is a popular open source computing platform designed for hobbyists, enthusiasts, and professionals who use the ‘computer on a board’ platform to build everything from retro video game consoles, to home automation systems, through to… orbital experiment platforms! The ArduSat project is a global collaboration. NanoSatisfi is the company that was formed to create the Kickstarter project, and is headquartered in San Francisco. The main ArduSat Payload Processor Module (pictured below) was designed by Australian Aurduino guru, Jonathan Oxer, who I talked to after the launch. Jonathan co-authored the popular how-to book, Practical Arduino, and has subsequently founded Freetronics, a Melbourne-based company specialising in designing and producing Arduino-based boards, kits, and components. 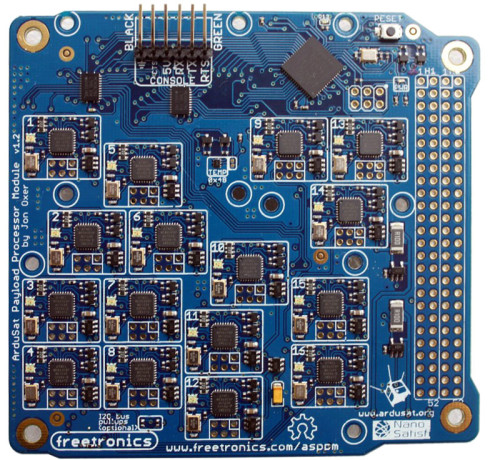 Arduino is open source hardware, which means that it is explicitly intended to be assembled, disassembled, studied, understood, and built upon. At the most basic level, people are able to build their own Arduino-compatible boards from common electronics components. Pre-built Arduino and Arduino-compatible boards are also available for under $50, allowing experimenters to get started at incredibly low cost even if they don’t wish to build the boards themselves. The effective removal of the entry barrier means that Arduino has made physical computing far more widely accessible than ever before.

The extremely low cost of building and launching the ArduSats creates an exciting opportunity for science education and outreach. Schools around the world are able to purchase experiment time on the satellites for only $300 for a full week of access. As Jonathan put it, “That’s an amazing price-point compared to anything previously available, and it makes it attainable even to individuals and small groups. A typical science class could run a bake sale, raise $10 per student, and then run their own experiments in space for a week!” The ground-based equipment that the students use to develop their experiments is similarly affordable, leading to some remarkable opportunities to encourage students into the STEM (science, technology, engineering, and mathematics) fields.

Students who have been preparing experiments to run on the ArduSats don’t have long to wait now. After taking just a fraction under 15 minutes to reach orbit, the HTV-4 is now on a leisurely 6 day journey to rendezvous with the ISS. Docking is scheduled for 9:29PM Friday (9th August). Once docked, cargo from the HTV-4 will be transferred to the various parts of the station for which it’s destined. The ArduSats will be transferred into the Japanese Experiment Module (nicknamed ‘Kibo’), where they will remain until they are due to be released. The release time hasn’t yet been scheduled, but it’s likely to be about 2 weeks after docking. The second ‘launch’ of the ArduSats will be a much gentler affair than their ground-shaking journey into space. This time, they will be attached to the end of the Kibo robotic arm (formally known as the Japanese Experiment Module Remote Manipulator System, or JEMRMS) and gently pushed away from the ISS. Once flying free, the tiny satellites commence their power-up and checkout procedures, and start to adjust their orientation so that they are positioned correctly and stably for ongoing operations. And that’s when the fun really begins!

Video of the HTV-4 launch: http://www.youtube.com/watch?v=VP7izZhhE9A

2 thoughts on “ArduSat: Kickstarting a new era in space education”