Gamma ray bursts are the most violent and energetic events in the entire universe. Powerful blasts of high energy gamma radiation, bright enough to be seen from literally the very edge of the visible Universe. And yet, we know surprisingly little about them. Of course, we have theories, but every now and again astronomers spot something which those theories don’t fully cover. Such as a couple of years ago, when an international team of astronomers caught a glimpse of the longest lasting gamma ray burst ever seen.

December 9th, 2011. NASA’s Swift telescope detected a sudden spike of gamma rays from somewhere within the constellation of Phoenix, visible in the Southern hemisphere. Gamma ray bursts (GRBs for short) like these are normally subdivided into two types, short bursts and long bursts, which have different causes. Short bursts last for just a couple of seconds, while long bursts can last for several minutes. But this particular burst, dubbed GRB 111209A (pictured above), was very different. One of a unique, rare breed of extra long lived GRBs, and by far the longest ever observed – lasting an unprecedented 7 hours!

Ever since then, astronomers have been picking at the data which were recorded, trying to work out exactly what kind of unusual circumstances would cause such a goliath GRB. One team, a collaboration between Bruce Gendre now at the French National Center for Scientific Research, and David Coward and Eric Howell at the University of Western Australia, managed to get to what may be the bottom of the puzzle. In short, these extra long GRBs are caused by the deaths of the Universe’s most massive stars.

It’s a sobering fact that all stars die. Some burn slowly for billions of years. The very smallest may burn for trillions. But the most massive stars burn out rapidly before dying in titanic explosions which we know as supernovae. It seems that the most massive of the massive, exceptionally rare, die in a unique type of GRB.

So far, only three of these ultra-long GRBs have been found, appearing so bright that some astronomers initially believed that they came from inside our own galaxy. As it happens, this wasn’t the case. Analysing GRB 111209A, Gendre and his colleagues hypothesised the source of it to be an extremely hot, massive star.

A furiously burning blue supergiant (possibly a hypergiant), hundreds of times the diameter of the Sun. When a star like this dies, its core collapses into a black hole, which then proceeds to start devouring the star from the inside out. As that black hole hungrily eats, its mammoth gravitational forces brutally tearing matter apart at the subatomic level, it generates an immense amount of energy which causes two jets of material to shoot out from its north and south poles. These are blasted outwards out with such ferocity that they actually punch two holes in the doomed star.

Read that again. A star which is hundred of times as massive as the sun, and these jets are powerful enough to blast two holes in it! The amount of energy required to accomplish that is truly difficult to comprehend. 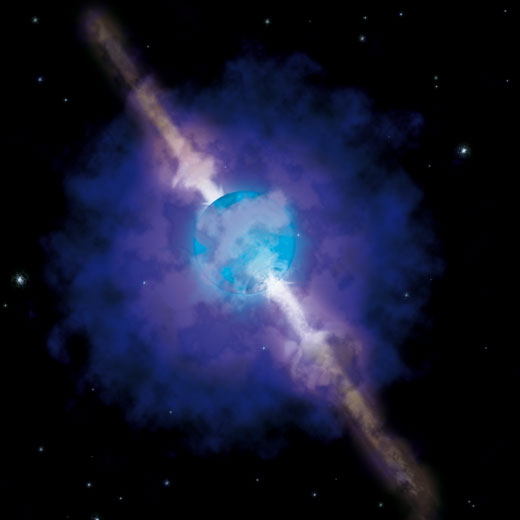 The stars which die in these titanic events still require a specific set of circumstances. These stars are apparently enriched in elements heavier than helium (astronomers refer to these as “metals”, even though chemists would disagree on a few counts). More of these heavier elements cause a star’s stellar wind to increase, causing its rotation speed to slow as it loses material. But faster spinning stars seem to be more likely to cause these long bursts, which led some to wonder if the massive star behind GRB 111209A was also cannibalising another nearby star – a process which could possibly cause its rotation to speed up.

The exact cause is still a matter of puzzles and hypotheses. We won’t know more until we observe more of these ultra-long GRBs, and seeing as we’ve only ever spotted 3 of them, it may remain a puzzle for a while yet. But a tantalising glimpse like this of one of the Universe’s most extreme events gives us a good reason to keep watching and waiting. When we do finally understand, it will almost certainly have been worth waiting for.