The interesting thing about research is that the most interesting results are always the ones which are unexpected. This is particularly true out in the frontiers of physics where, frequently, no one really knows quite what to expect. While news reporters were swift to leap to the conclusion that the Higgs boson had been discovered back in July, the scientists at the CERN press conference were noticeably hesitant to make any such claims outright. Interestingly, it seems that they were wise to do so – in light of the more recent findings, their apprehension has been proven to be well advised. Simply but confusingly, the CERN experiments seem to have yielded two bosons for the price of one.

A huge experiment like any of those taking place at the Large Hadron Collider (LHC) collects a lot of data, and believe me when I say that analysing and interpreting the data you can collect from any experiment is not an easy task. A lot of effort needs to be made in order to make sure you understand everything you’re seeing. Back in July, there were a few obvious things which were uncertain. For one, the “Higgs-like particles” observed at CERN appeared to be breaking up and decaying into photons more rapidly than predicted. This was the first clue that something unexpected was going on with the LHC data. However, on closer inspection, the results were so unexpected that there was thought to be a fault with the equipment. Everyone was hoping to find a peak for the Higgs boson, but no one expected there to be two! With one signal detected at 123.5 GeV and a second at 126.6 GeV, there’s a statistically significant difference of 3.1 GeV between the two. While the data have been checked and re-checked throughout November, they appear to be perfectly sound. As far as anyone can tell, these are two genuine detections of two particles. 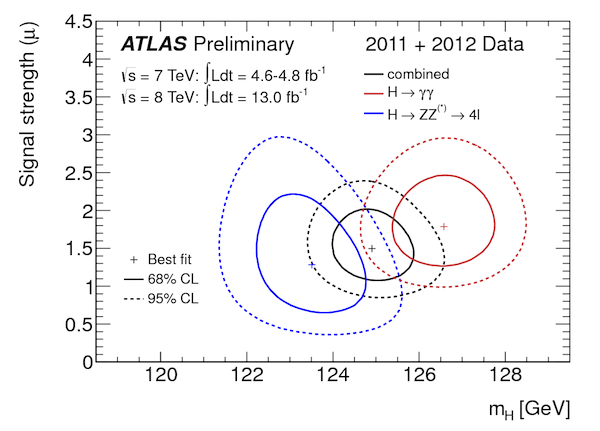 What exactly this means is very much an open question. Assuming these data are correct, aren’t any existing theories which explain why there would be two Higgs-like signals so close together. Some hypotheses predict multiple Higgs bosons, but none predict them to be so close together. What’s more, these two particles seem to fragment into different products – the 123.5 GeV particle decays into two Z-particles (a different, more familiar variety of boson), while the 126.6 GeV particle decays into photons. So what’s going on?

Physicists are interesting folk, and I’m sure some would be fascinated if this turned out to be something new. Fabiola Gianotti, director of the ATLAS experiment at CERN has appeared noticeably excited before by the prospect of new and unknown physics being discovered. However, the other thing about physicists is that by their nature, they need to be highly skeptical, particularly when it comes to their own work. Adam Falkowski, a Paris-based particle physicist, states what most researchers are probably thinking on his blog Résonaances – that the result is most likely due to a “a systematic problem”. In other words, a problem in the apparatus such as a poorly calibrated detector. To date, there is no explanation from CERN for the unusual data. So is it a glitch, or could there really be two particles being detected here?

Whatever is being seen here, it certainly appears to be at least subtly different to what the theories predict. Even if the second detection turns out to be a fault in the detectors at CERN, the fact that the original detection appeared to decay into photons more readily than it should is still unusual – though as noted by Matt Strassler in his blog, Of Particular Significance, “the excess is still not yet 3 standard deviations. Deviations of this size do come and go.  And we don’t have confirmation from CMS.  So the situation remains tantalizing but unfortunately not yet very convincing.” Right now, we still need to wait for official confirmation from CERN. Personally, I suspect that isn’t likely to happen until they know more about it themselves. A further announcement is currently scheduled for March 2013.

2 thoughts on “The Higgs: An Unexpected Boson”